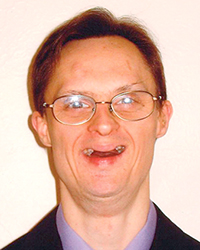 A Celebration of Life service for Richard Phillips, 51, of Austin, Minnesota, will be held at 3 p.m. on Saturday, Sept. 7 at the LaCanne Family Funeral Home in Windom, Minnesota, with Pastor Adam Roberts officiating.

A private family burial will take place at a later date in Bingham Township Cemetery in Woden, Iowa. Visitation will take place from 2-3 p.m. on Saturday, Sept. at the LaCanne Family Funeral Home in Windom. Richard Phillips passed away on Sept. 1 at Mayo Clinic Health System in Austin.

Richard “Dick” Phillips was born on Feb. 16, 1968, in Watertown, South Dakota, to Beverly Jean Phillips. He was baptized in Marietta, Minnesota, in his aunt Barb’s home. He was later confirmed in Austin. Dick received his early education at the Sunnyside Elementary School in Red Wing, Minnesota, and later attended Austin High School, graduating in the Class of 1989. He then participated in Special Olympics for many years and worked at Cedar Valley in Austin until two months ago when he retired. Recently, Dick’s health had been declining and he was hospitalized at Mayo Clinic Health System in Austin where he passed away on Sunday, Sept. 1, 2019, at the age of 51 years.

Dick loved to spend time with his family and getting down on the floor with his nieces and nephews was one activity that they all enjoyed. He would get on the trampoline and jump as high as he could with all of us even though he was afraid of heights. Dick also enjoyed riding on the 4-wheeler, especially with Scott because he would go really fast and going camping. His two favorite holidays were Halloween and Christmas and he loved dressing up for Halloween and couldn’t wait to open presents for Christmas. He loved music! He loved to sing and dance to all types of music. Dick even had his own karaoke machine to sing along with at home. His all-time favorite song was “Wake Up Little Susie.”

Blessed be the memory of Richard “Dick” Phillips.

Arrangements are under the care of LaCanne Family Funeral Service in Windom. Condolences can be sent online to: www.lacannefuneralhome.com.