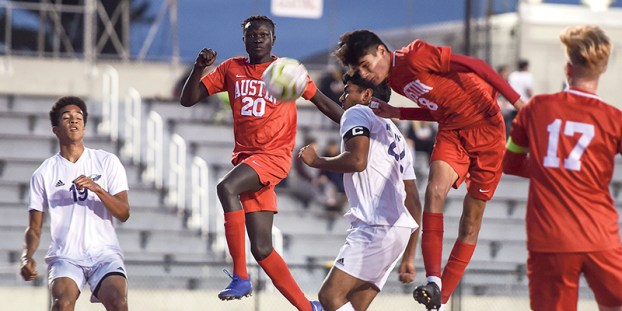 Austin’s Anga Lual moves in to make a play on the ball against Red Wing in the first half Thursday night at Art Hass Stadium. Eric Johnson/photodesk@austindailyherald.com

The Austin boys soccer team has been on a roll for the past few weeks, and the Packers were flat out unstoppable as they picked up a 10-1 homecoming win over Red Wing (1-8-1 overall, 0-7-1 Big Nine) in Art Has Stadium Thursday night.

Austin (10-1-1 overall, 8-0-1 Big Nine) scored five times in a 10-minute stretch to grab a 5-0 lead in the first half and it never looked back. Kee Reh scored on a penalty kick and strike to get the rally started and Keaton Goetz scored to make it 3-0 with 26:42 left in the game.

Elisha Simerson and Julio Hernandez each added two goals in the win, while Andres Garcia, Henry Tolbert and Jose Vallardes each scored once.

“We had a really big crowd tonight and we just got rolling. When we get rolling, we don’t stop,” Simerson said. “We’ve been taking it one game at a time (this year) and we’ve treated every opponent like we’re playing the best team in the state.” 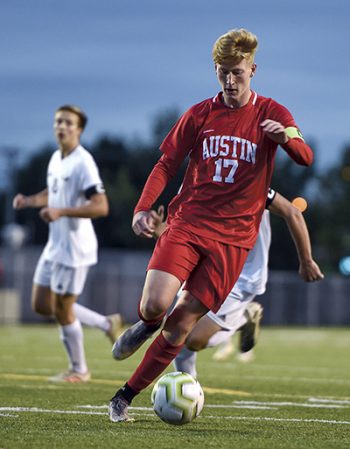 The Packers have now won seven straight games and they haven’t lost since they fell to Como Park 2-1 in the season opener Aug. 24. Austin has outscored its opponents 41-9 on the season.

“We want to win everything,” Hernandez said. “We’re getting better at communication and the team is working hard every day in practice. On the field, we’re showing where we are on game nights.”

With just two conference games remaining, the Packers, who have won at least a share of the Big Nine title in each of the past two years, are tied with Northfield atop the Big Nine. The Packers and Raiders will face off in Northfield at 7 p.m. on Oct. 1.

“They’re a tough team and, with us going there it’s going to be 10 times tougher,” Simerson said. “We think we’re ready for it.” 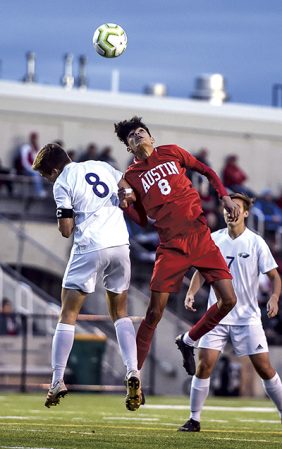