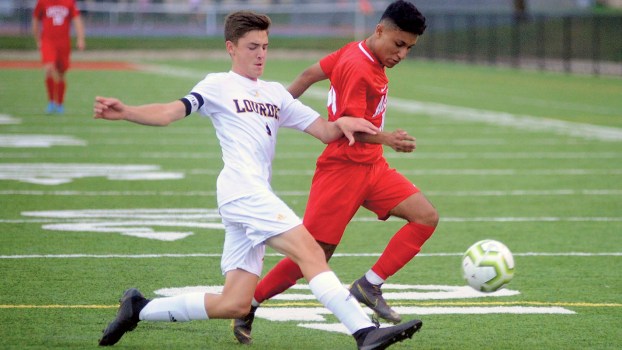 The Packer boys soccer team was in the midst of a four game stretch in five days and they needed a break at the right time.

That break came in dramatic fashion as Austin was able to slip past Rochester Lourdes 2-1 in Art Has Stadium Monday night.

Austin’s Henry Tolbert had a game-clinching penalty kick blocked with under a minute left, when the Eagles (4-3-1 overall) took possession and ended up with a quick transition that left them with a golden opportunity against Austin keeper Casey Berg. Berg, who stopped 10 shots on the night, dove as far as he could, but the ball slid past him and just missed finding the net. 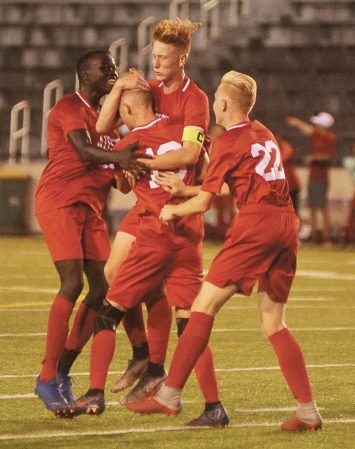 Austin’s Lucas Evanson is mobbed by his teammates after he scored on a free kick to put Austin up 1-0 in the first half against Rochester Lourdes in Art Hass Stadium Monday. Rocky Hulne/sports@austindailyherald.com

“It was really close,” Berg said. “I just missed it and then I turned and saw it go just outside the post. There was maybe an inch or two between the post and the ball.”

Austin (6-1-1 overall) looked like it had taken control when Tolbert hammered home a goal to make it 2-0 early in the second half, but the Eagles put on the pressure when Daniel Brown connected on a penally kick that sailed just out of Berg’s reach with 8:34 left in the game.

That led to a wild eight-minute stretch that almost saw the game slip away from Austin.

“I thought we played well for the whole game. There’s still some newness to varsity for some of the guys. We’ve got to maintain that composure,” Austin head coach Jens Levisen said. “When there’s 28 seconds left and we have a PK, guys should be back. Half the team is up hoping to attack and we don’t need to have that many guys up.”

The Packers were playing the game with tired legs as they had beaten Mankato West 5-3 in Austin Friday and they won 2-1 in Worthington Saturday, before taking one day of rest to take on Lourdes, a perennial power in Section 1A. 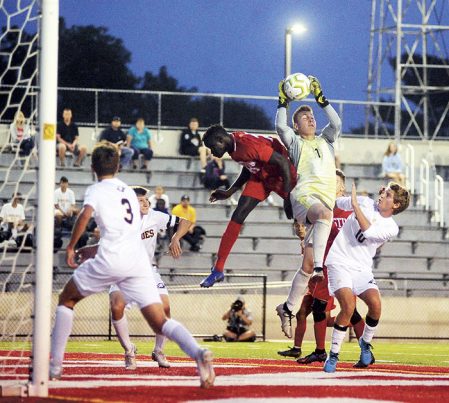 Tolbert has scored four goals in the last three games for the Packers and he earned his one goal on Monday as he was constantly facing physical pressure from the back end of the Eagle defense. Tolbert drew a few penalties, but he still had to overcome the fatigue he was fighting.

“In practice we’ve talked about when you get tired or knocked down, you just keep going. Don’t go down, just keep going. That’s what I was trying to do,” Tolbert said. “We’re playing great. There’s a lot of talking and movement out there. It’s really fun to play right now.”

Austin was playing without Andres Garcia, who was out with an illness, but the team’s depth paid off.

“We had some guys that played the entire game and played hard the entire game. Andres was sick today and we had some other guys step up,” Levisen said “They’ve got to be physically dragging a little bit right now, but they were still able to play hard tonight.”

Lucas Evanson scored  on a 25-yard free kick to put Austin up 1-0 in the third minute of the game and he scored his first ever varsity goal in Saturday’s win over Worthington. 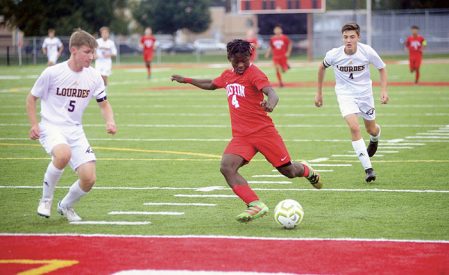 The Blooming Prairie volleyball team had a three-match winning streak snapped when it lost to Alden-Conger (5-3 overall) in five... read more