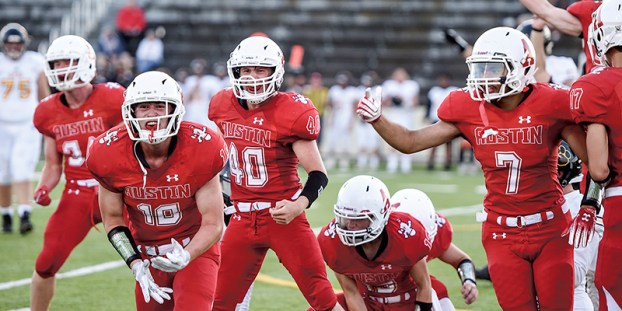 Packers shut it down: Chesak runs strong, defense closes it out

The Austin student section may have been chanting Andy Chesak’s name in the closing seconds of the Packers’ 34-28 win over Mankato East, but the Packer defense made some big plays as well in Art Hass Stadium Friday night.

East had two chances for a go-ahead drive in the final five minutes of the game, but Austin thwarted the Cougars (1-1 overall) both times. On the first drive, Oliver Andersen and Mason Silbaugh came up with back-to-back sacks to end the threat and Samuel Misoi clinched the win when he picked off a pass on third and long at the Cougar 30-yard line with 1:34 left in the game.

“We just had to shut their offensive line down and we had to keep pounding on them,” Silbaugh said. 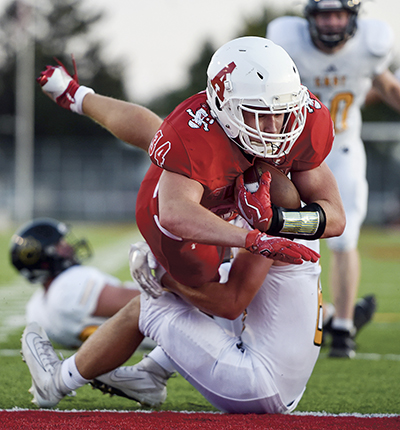 Austin’s Andy Chesak dives into the endzone for a touchdown in the second quarter against Mankato East Friday night at Art Hass Stadium. Eric Johnson/photdoesk@austindailyheraldcom

While the defense closed the door, Chesak was the one who put Austin in position to win the game. He ran for a career-high 271 yards and five touchdowns on 25 carries, and he also blocked a punt that set up a TD.

“I’m feeling tired, but I’m feeling really confident in this team,” Chesak said. “We’ve worked really hard for this and I just want to do whatever I can to win. This was a must-win game.”

The Packers (2-0 overall) went with a deeper rotation at running back in week one, but head coach Ed Schmitt couldn’t keep the ball out of Chesak’s hands on a night when he was running through and around East defenders on a regular basis. Chesak had four runs of 20 yards or more and two that eclipsed the 50-yard mark. 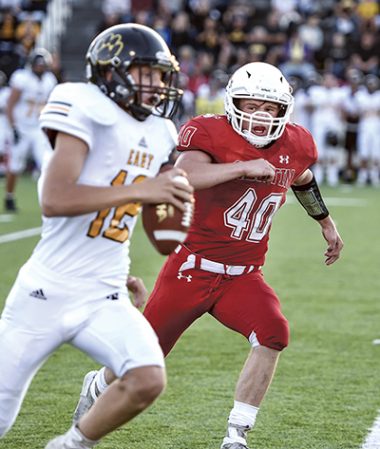 “We were just going with the horse. He ran the ball really hard and he’s such a tough kid,” Schmitt said. “I always tell the running backs that they’ll never get 30 carries, but he came close tonight. We were taking what the defense was giving us and he kept telling me he was OK. We just keep feeding him.”

The Packers closed a wild second quarter with a pair of big plays as Austin put up nine points in the final two minutes of the half to take a 21-16 lead into the break. Chesak returned a kick-off 55 yards to set up a 25-yard field by Joe Ewing and Joseph Walker threw his body in harm’s way to recover a fumble on the ensuing kick-off to set up a one-yard TD by Chesak with 15 seconds left in the half. The Packers are feeling good about where they stand right now.

“This is one of the closest teams I’ve ever been associated with. It’s a blast to come to practice,” Schmitt said. 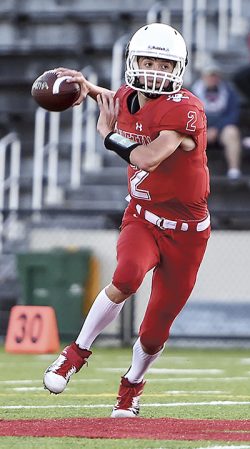 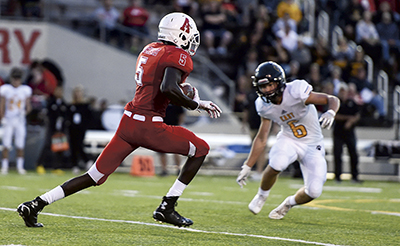 A means of celebrating what makes Austin the diverse community it is, Welcome Week is almost here. The 4th annual... read more