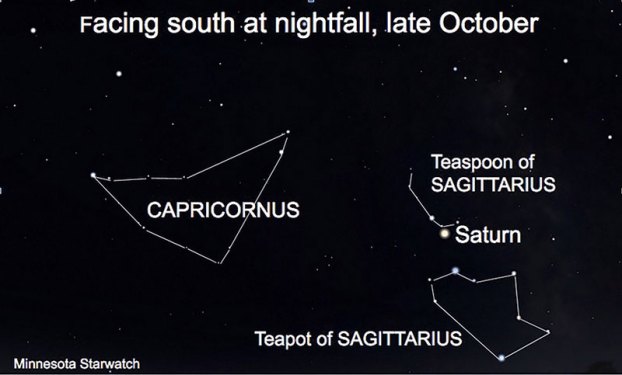 October brings Mars and Venus to the night sky

In October a celestial changing of the guard begins.

Drifting steadily westward, Saturn and Jupiter are preparing to exit the evening sky. They set earlier each day, but since the sun sets earlier too, we can still see them at nightfall all month. Watch as the distance between them shortens from 26 to 22 degrees during October. A waxing moon appears close to Jupiter on the 3rd and close to Saturn on the 5th.

Meanwhile, Venus and Mars are waiting in the wings. Venus makes it — barely — into the setting sun’s afterglow by the end of October. Likewise, Mars limps into the morning sky just ahead of the rising sun and may be visible while the calendar still says October. Venus will be a welcome “evening star” this winter. Mars takes a long time to pull away from the sun and brighten, but in mid-October next year it will shine nearly 60 times brighter as Earth laps it in the orbital race.

East of Saturn, the fall constellations are well up by mid-evening. They include the relatively dim water constellations Capricornus, the sea goat; Pisces, the fishes; Piscis Austrinus, the southern fish; and Aquarius, the water bearer, as well as Pegasus, the winged horse.

Capricornus may be the hardest to find because its stars are dim and it has no defining features. In fact, a star chart is a necessity if you’re unfamiliar with any of these constellations. The easiest is Pegasus, whose Great Square, which outlines the horse’s body, dominates the dimmer stars beneath it. Immediately beneath it, the ringlike Circlet of Pisces isn’t hard to find against a dark sky. In the south to southwest, the Summer Triangle of bright stars still shines.

October’s full moon rises the evening of the 13th. On Halloween a crescent moon of the next cycle hangs low in the west for trick-or-treaters, who will be celebrating a holiday rooted in the ancient Celtic world. Called Samhain (rhymes with “how-when”), Oct. 31 was the day when evil spirits emerged at sunset from a six-month confinement. They proceeded to wreak havoc with humans until sunrise May 1, when they were again banished for six months. To ward them off, people left offerings of food and set out lanterns made from gourds. Samhain marked the beginning of the dark half of the Celtic year and was one of four cross-quarter days falling midway between an equinox and a solstice.

Check out the astronomy programs at the University of Minnesota’s Bell Museum Exploradome: www.bellmuseum.umn.edu/education/exploradome

Soundtrack: Lilla Parada has released her first album, hoping it will be the music people need

Lilla Parada doesn’t want you to be sad, but she does want to be the soundtrack for those days you... read more