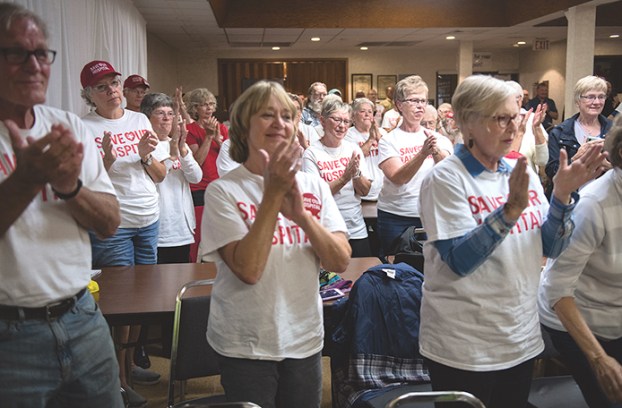 MercyOne to open clinic in Albert Lea in 2020

After more than two years of grassroots efforts, the Albert Lea Healthcare Coalition announced Thursday that MercyOne North Iowa will open a clinic in Albert Lea in early summer 2020.

Leaders of the two parties signed a letter of intent during a press conference at the Albert Lea American Legion, where they discussed more details of the plans in front of a full-house crowd of residents with the Save Our Healthcare organization.

“This is a great day for the citizens of Albert Lea and the surrounding communities,” said Brad Arends, chairman of Save Our Healthcare and president of the Albert Lea Healthcare Coalition. “This outcome is even better than we expected in that we not only are on a path to restore services that have been removed from Albert Lea, but we also will have more specialists available, and our cost of care will be substantially lower than most communities in south-central and southeastern Minnesota.”

Plans for the new clinic will be delivered in five phases — starting with a primary care clinic with enough space for visiting specialists and extended hours for urgent care, including the weekends. Future phases planned include additional specialists, imaging center and an ambulatory surgery center. Each phase will be implemented as goals for patient loads are achieved.

Rod Schlader, president of MercyOne North Iowa, said he hoped the fifth phase could be reached in three to five years. At that point, there could be an estimated 85 full-time employees.

“We really pride ourselves in being able to understand rural health care. We have a long history of helping rural communities keep or deliver health care at a high quality and low cost.”

Arends said discussions for the location are ongoing, though there could be an announcement potentially in the next few weeks. Costs for the first phase are estimated at $2 million for 10,500 square feet of space.

Schlader said right now there are no plans to explore inpatient services because of legislation that critical access hospitals must be at least 35 miles from another hospital.

“If something changes along that line, we’d reconsider that,” he said.

When asked how the hospital plans to offer services in a community where there is already an established provider, Schlader said he does not see that as a problem.

“We think there’s needs in the community for primary care, so I don’t see our plans interfering with their plans,” he said. “It’s not about interfering with them. It’s really about trying to deliver high-quality, low-cost care here and providing better access.”

Arends said he anticipates the clinic to be an economic attraction for Albert Lea that could help employers recruit and retain employees.

“If Albert Lea can have lower-cost health care, that’s going to be a big attraction,” he said.

Arends thanked the members of the Save Our Healthcare organization, who cheered throughout the presentation.

“You are the true heroes here,” he said. “You kept this movement alive. You are the ones that deserve the credit here because without all of you, we wouldn’t be here today.”

He also recognized Mariah Lynne, the former co-chairwoman of the Save Our Healthcare organization.

He said when he and other leaders of the group looked at all of the different options they had for a new provider, MercyOne was the option that could put the whole package together.

Save Our Healthcare member Connie Wadding described the day as “fabulous.”

“It’s been a fun battle — having gone to the Capitol, to Rochester, to New Denmark Park (each week),” Wadding said.

“I think this is one of the greatest things that’s happened in Albert Lea,” echoed resident Ron Woitas, a member of the Save Our Healthcare group. “I think it will be well worth it.”

He said he was a part of the effort not only for his own health care, but for the health care of the younger generation.

Leaders of Save Our Healthcare and Albert Lea Healthcare Coalition have worked to bring in a second provider since Mayo Clinic Health System in Albert Lea announced in June 2017 it would transition most inpatient services from Albert Lea to Austin.

Rick Thiesse, senior communications media specialist for Mayo Clinic Health System, said after the announcement that the health system is proud to be a longstanding health care partner to the residents of Albert Lea, Austin and the surrounding communities.

“We continue to offer highly valued quality of care with a wide range of services — including full clinic services, robust emergency departments, outpatient surgeries and pregnancy care before and after delivery on each campus,” Thiesse said. “In addition, we offer a seamless connection to the Mayo Clinic care patients need and deserve when facing serious or complex illnesses.”

MINNEAPOLIS — A deadly deer virus has been confirmed in a group of whitetails in central Minnesota. Epizootic hemorrhagic disease,... read more