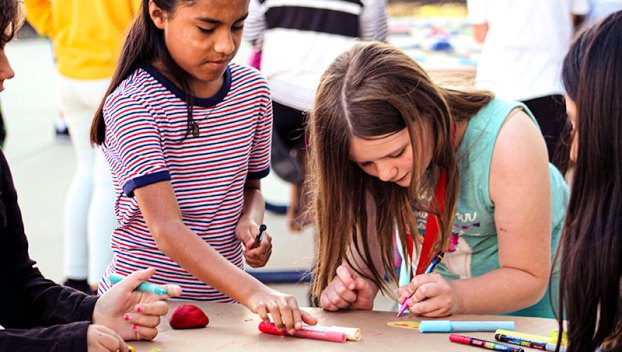 IJ Holton Intermediate School fifth graders paint encouraging words on rocks during school on Wednesday that will be placed around Austin for residents and visitors to pick up. Hannah Yang/hannah.yang@austindailyherald.com

No matter the language someone speaks, IJ Holton Intermediate School students believe kindness is something that every person can understand.

On Tuesday and Wednesday morning, no time was wasted for IJ Holton fifth and sixth graders who wanted to get the message of being kind to each other out into the community. Partnering with Ameriprise Financial, more than 800 students spent the last two days painting words of affirmation onto colorful stones that will eventually be placed around Austin.

What’s different about this year’s event was that students were able to write positive words or phrases in their native language. Although not everyone may speak English or another dialect, it was a more inclusive approach to welcoming new students into the school district, said Cori McRae, an IJ Holton sixth grade teacher who organized Kindness Rocks at the school.

Wanting to engage more students, McRae worked with the student council and the English Learners Education department to ensure that no students felt excluded from a fun activity, as well as the rest of the communities living in Austin. 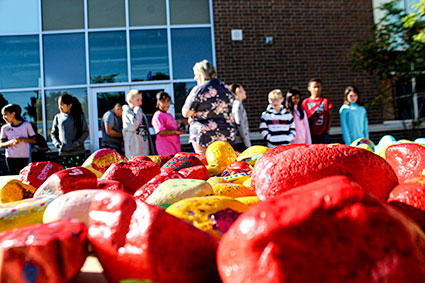 IJ Holton Intermediate School fifth graders line up to head back to class after taking Wednesday morning to paint kind messages onto rocks that will eventually be placed around the community. Hannah Yang/hannah.yang@austindailyherald.com

“We can have a further outreach beyond just our English speaking population,” McRae said. “We can reach other community members too, and hopefully, brighten someone’s day. We as a district and school are understanding that this is an opportunity to make our new students feel welcome and we want them to know it’s OK to write in their native language and to be excited to speak it and see that we accept them for who they are and that we embrace them.”

APS reflected this diversity through its demographics. About 35 percent of the district’s students speak another primary language other than English, according to the 2018-19 demographics report. There were a little over 44 different languages spoken at APS, with more than 20 percent speaking Spanish and about 15 percent speaking another language.

A negative stereotype that many in the public have of those who don’t speak English is that the individual is “slow” or “not intelligent” for struggling to speak fluently. Yet, that’s not the case at all, McRae said, and that the district has been forthcoming about acknowledging the challenges that immigrants face in transitioning, such as learning a completely new language and for others having a high expectation that newcomers must be able to progress within a specific timeframe and perform at the same level as native speakers. 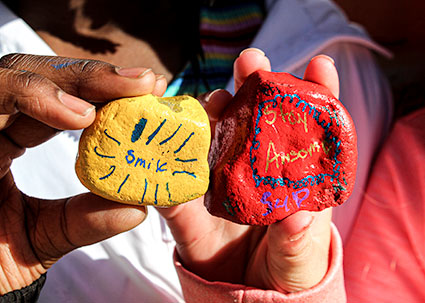 “They are just as intelligent, just in a different language,” she said. “The school district is a diverse community and it’s what makes us unique. We wanted to make sure that our newcomers felt included and that they’re not hindered by a language barrier and that they don’t need to be separate to be a part of our school events and programs.”

Having kindness rocks written in the diverse array of languages that make up APS was a statement in itself, but also a sign of progress in the welcoming nature of Austin, McRae said. She felt that although there may still be some reluctance of a few to accept those who are not from the area, APS was a place where she felt newcomers can belong and find a place that would not exclude them.

“I can only imagine what it’d be like if I went to another country, where English was not the native language,” she said. “I’d get excited if I see a word written in English and think ‘I know what that means!’ and be able to understand what’s happening. We wanted them to know that it’s OK to know their native language and that they can keep speaking their language. It’s such a confidence booster for them knowing that it’s OK.”

Whether she felt that more people were becoming accepting of those who were newcomers, McRae said that as a community, Austin was welcoming to those who have so much to offer.

“In our community, Austin is very forward-thinking,” she said. “I don’t speak for every county or town, but I feel that Austin welcomes diversity and that we’re better off for it. I do feel that the perception is shifting, but our town has always looked ahead.” 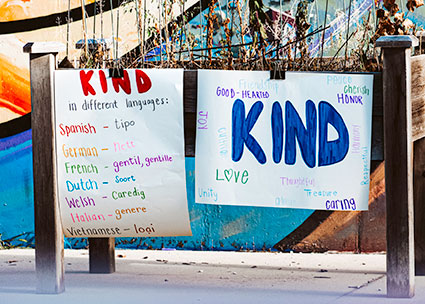 Several posters were hanging on the standing garden beds at IJ Holton Intermediate School that showed a variety of different languages that students can write on their kindness rocks.

Outside on the patio, students were busy painting on different colored rocks. Overseeing them was Abby Heimer of Ameriprise and fellow volunteers, who helped distribute the rocks as well as getting children to think carefully about the types of messages they’d like to share with Austin.

Several posters consisting of words translated into a variety of different languages were hanging on the standing garden boxes as a point of reference. Some students took to writing these familiar words onto their specific rocks.

“I had no idea how many different languages are spoken here,” Heimer said. “These rocks will brighten someone’s day, and students have been so well behaved and very receptive to this.”

Gathered in small groups around picnic tables, students were digging into different colored acrylic paint pens and spent time drawing various symbols and shapes onto their rocks. Some words were simply like “beautiful” and “Be kind.” Some rocks were written in languages such as Vietnamese, Spanish and Italian. Each stone was unique, just like the students who created them.

“I like painting words,” said Emmanuela Arthur, fifth grader. “These are kind words that I hope would make (people) feel good.” 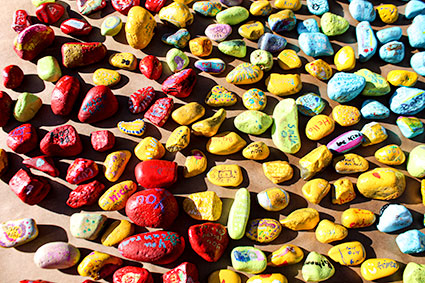 A wide array of colorful stones painted with kind messages by IJ Holton Intermediate School students are gathered by Ameriprise Financial employees. Soon, these rocks will be placed around Austin for community members to find and to pick up.

Her friend, Peyton Wood, also a fifth grade student, took some time to paint a rock as well. She was amazed at the various different languages that were spoken at APS, but was worried about how others may be “rude” toward those who may not speak English as a first language.

“They may not understand it,” Wood said. “They may try to throw it away. But, I think it’s cool that some people may understand what’s written on the rocks and that would not make them feel so alone. Some people might understand. It might make their day.”

As the rocks were being collected to eventually be scattered around Austin, Ashley Reyes Garcia spent a little time trying to finish writing “be positive” onto her rock. She felt that it was something she wanted to see happening more for the people around her.

“I like the word positive, because it means doing something right,” Reyes Garcia said. “I want more happiness and positivity in the world.”

Emergency snow removal ordinances and parking was one of the subjects of conversation during Monday night’s work session. Although there... read more