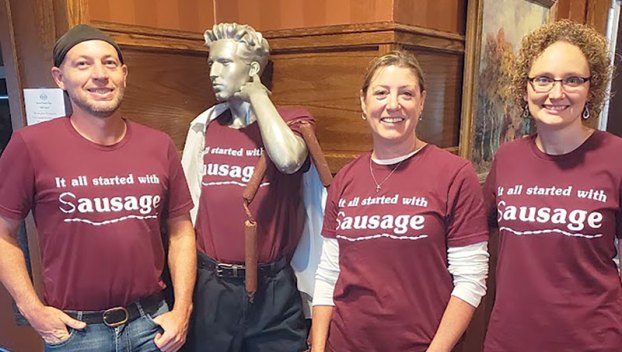 “It All Started With Sausage” is a tagline the Hormel Historic Home created as a humorous way to show history can be fun. Photo provided.

Have you heard the new slogan at the Hormel Historic Home?  “It All Started With Sausage” is a tagline we have created as a humorous way to show history can be fun.  Sausage was indeed one of the first products upon which George A. Hormel built his business.

George gave credit to sausage for much of his success. When asked how his company survived the economic panic of 1893, he replied, “I think it was the sausage.”

He wasn’t averse to getting out to meet his customers.  He said:

“As often as I could get away from the plant, I took one and two day trips on the road, selling sausage, buying hides — making any kind of dicker in which a red cent’s profit could be seen.”

George saw the value in sausage even before starting his own company.  He wrote:

“There was special opportunity for quality in an item to which we had been giving increasing attention during the latter years of my partnership with Friedrich – sausage. Since we had already built a reputation for our product in a small way, it was not hard for the new business to establish volume in this product …. Because we could always find a market for sausage, its manufacture made it possible to keep our men busy every hour of the day.”

George knew he had a following for his sausage products and said:

“An old friend, commenting on the early days of our acquaintance, once said to me, ‘I never thought you’d get anywhere; your sole ambition in life seemed to be to make a better sausage.’ To onlookers it certainly must have seemed a small ambition. But first things come first. A better sausage was one thing we could make with the limited means at our disposal.”

“I sold other things, too, but sausage was the mainstay. My brother John, who had lately joined me, took to his bicycle and scoured the countryside for prospects nearer home. He even rode to Preston, fifty miles from Austin, to promote our quality sausage…”

“Of the hundreds in business before May of 1893, only four independent packers remained in the territory between Chicago and the Missouri River by the end of 1894. That we were not among the casualties was undoubtedly due to our emphasis on quality and to the fact that we converted raw material which would otherwise have been wasted into quality sausage.”

The HHH leadership team is working hard to keep the home fresh and vital for all ages, and we thought a fun promo t-shirt would appeal to many and promote the early history of George Hormel’s success.  Get your sausage shirt today at the HHH office.