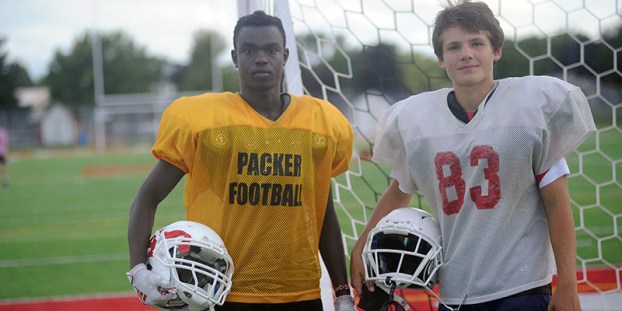 Austin punter Samuel Misoi, left, and kicker Joe Ewing have given the Packers a big boost in special teams this fall. Both players have a background in soccer and Ewing is also a a member of the Austin boys JV soccer team. Rocky Hulne/sports@austindailyherald.com

Getting their kicks in football: Soccer background has lifted Austin’s kicker and punter to new heights

Austin freshman Joe Ewing is used to the drill by now.

He finishes up soccer, practice and runs over to the football field, where he may have to jump the fence before he throws on the pads to join the Packers for the kicking portion of football practice.

Ewing is a full-time JV soccer player for the Packers, but he moonlights as Austin’s kicker under the Friday night lights.

Ewing has played soccer and football for quite some time now, but he’s moved to a bigger stage this fall.

“It’s quite the change. The ball got bigger, the crowd got bigger and the nervousness got bigger,” Ewing said. “There was a lot of pressure in that first game, but I think I’m good now.”

Ewing’s counterpart, Austin senior punter Samuel Misoi, also has a background in soccer, but he switched to football when he moved from Kenya to the United States as a 12-year-old.

Misoi, who also plays defensive back, had his sights set on playing wide receiver, but he started to explore the possibility of kicking a year ago. At first, Misoi struggled with his punts, but he logged in hours of practice and hours on youtube studying the punting form of NFL players.

Before he knew it, Misoi was punting the ball consistently and efficiently. 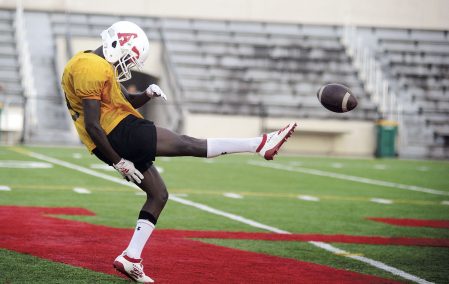 “Once I started seeing a lot of improvements, I realized I had to continue doing it,” Misoi said. “I see the importance of being a punter. When you have to play defense after punting, you strive to put the ball way back there.”

Misoi and Ewing have both been crucial in winning the field position battle for the Packers (2-0 overall). Ewing can kick the ball to the end zone on kick-offs and he can also be relied to kick field goals from around the 35-yard range. Misoi has shown a quick release and a strong foot, that has put the Packer defense in some good spots this year.

“They’re both just huge for us. They each asked for a couple of footballs from me over the summer,” Austin head coach Ed Schmitt said. “I would see Samuel out here punting by himself and Joe would come out here and kick extra points. They were out here all of the time.”

Misoi struggled with his speaking accent when he first moved to Austin, but he didn’t struggle to find a passion for football. He was immediately drawn to the sport when he was introduced to the sport.

“I like the excitement of it. It’s more of a rush and more exciting than soccer, where you get a goal every twelve or 15 minutes,” Misoi said. “In football, you get a rush on every play.”

No matter what field he’s kicking on, Ewing always brings a lot of accuracy and a lot of strength.

“In soccer I learned how to place the ball well and that transferred to football once I started kicking,” Ewing said. “I play three or four games a week, but I feel like it’s good for me. They’re both great organizations and they’re both great programs.” 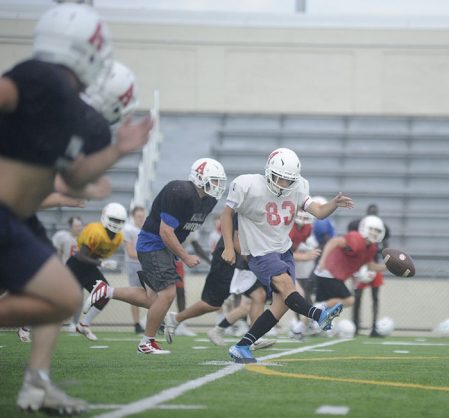 Joe Ewing kicks off for the Packers in practice Wednesday. Rocky Hulne/sports@austindailyherald.com

Misoi said that he has learned the importance of special teams play.

“People should appreciate punters and kickers more. It’s a very important job,” he said. “You have to work on accuracy and hang time and if you’re not doing well, the rest of the team would fall apart.”

The Packers will play at Kasson-Mantorville (1-1 overall) at 7 p.m. Friday. Austin is looking for its first 3-0 start in more than a decade.

Austin grad Brooke Gentzler will be one of seven inductees into the St. Cloud State University (Minn.) Athletic Hall of... read more