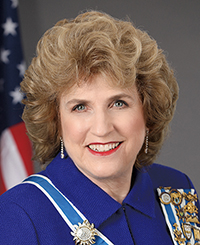 Latham will be providing leadership to the 22 DAR chapters in Minnesota.

She has been a member of the Monument Chapter, NSDAR monumentdar.simplesite.com, in Edina since 2002 where she served as regent and registrar. She has also served in many leadership roles at the MNSSDAR level where she served as State Corresponding Secretary and State Vice Regent.

NSDAR was founded in 1890 to promote historic preservation, education and patriotism. Its members are descended from the patriots who won American independence during the Revolutionary War.

ST. PAUL — A Democratic legislator has resigned from a paid fellowship at the University of Minnesota amid questions over... read more