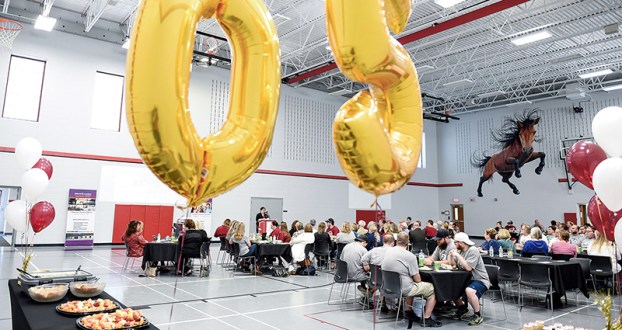 There have been many changes at Gerard Academy since Joseph “Doc” and Patricia Endres opened its doors in 1969.

But one abiding mission has remained the same from the beginning, said Executive Director Kay Wolf on Thursday.

“It’s about the people; it’s about the lives impacted, the families, the staff – all working together to make a difference in peoples’ lives,” Wolf said.

Gerard Academy, which provides psychological, psychiatric and behavioral services for children in its residential program celebrated its 50 years in Austin at its campus on Thursday.

On hand were officials from Nexus, its parent company; and special guests, which included the Endres’ sons, Tom, from Greeley, Colorado and Todd Endres from Colorado Springs, Colorado; Tamber Sherman, whose son attended Gerard; and former director Brent Henry. 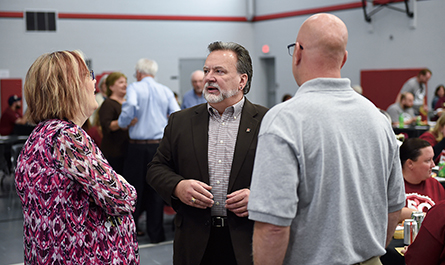 Tom Endres talks to a pair of people Thursday at Gerard Academy’s 50th anniversary celebration. Tom is the son of Joseph and Patricia Endres who founded Gerard. Eric Johnson/photdoesk@austindailyherald.com

“It’s amazing and awe-inspiring what’s happened here over 50 years; I know my parents would be very proud,” said Tom Endres. “With all those changes over the years, my dad’s mission never changed.”

Hundreds of children have benefitted from the services provided by Gerard whose treatment in a residential setting has always been a hallmark of its success. Joe Endres recognized that the setting was an important part of treatment, said Wolf. Gerard currently serves 80 children, ages 6 to 18 in its residential program, she said. 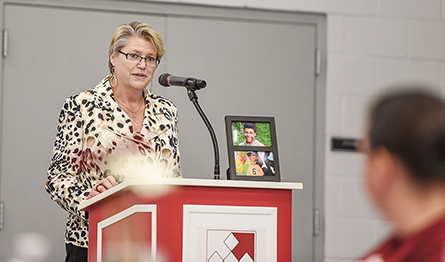 “The standard for treatment then was very different than what we see here,” she said. “Sterile, institutional environments” were the norm — but that was never the case at Gerard. Endres wanted a residential facility, much like a home, that proved to be less intimidating to children, she said. The Jay C. Hormel home became its home.

And it worked. It also grew, adding dorms and other new buildings as the years progressed.

But it must be remembered that Gerard under different founders might have been lost, said Tom Endres. 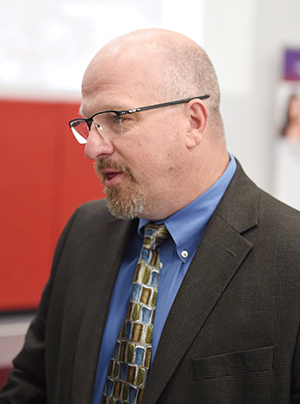 Todd Endres is the son of Joseph and Patrica Endres who founded Gerard Academy. Eric Johnson/photodesk@austindailyherald.com

“She was amazing,” he said. He added that he asked her once how she was able to accomplish so much at Gerard.

“She said, ‘I had a firm understanding of your dad’s vision,’” Todd recalled. “And, she said, ‘I surrounded myself with really good people.’ Gerard has always had those people.”

Nexus CEO, Dr. Michelle K. Murray, said Gerard has maintained three characteristics of a successful business. The first is “a laser-sharp customer focus” that has recognized needs and met them. Gerard has “also created, charted new territory” with its expanded vision for outpatient services that, since its inception since 2015, has served over 760 clients in Austin and Albert Lea, she added.

The third important ingredient is its close relationship with its community, witnessed by its work with all sectors.

When George Hormel retired in the late 1920’s, he gifted his home to the YWCA; today it is known as... read more