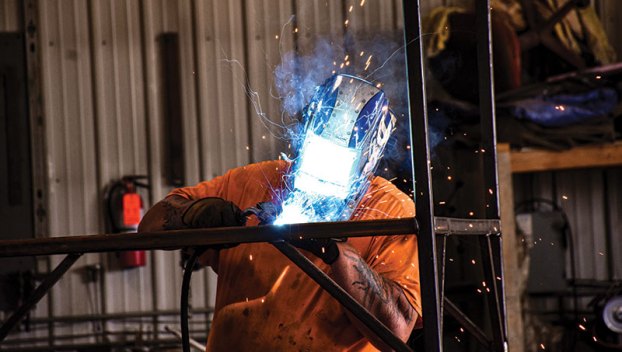 Brett Naylor welds pieces of metal together as part of the hunting stands that will be delivered to Legionville, north of Brainerd. These stands are handicap accessible, and will accomodate disabled veterans who will be deer hunting soon. Photos by Hannah Yang/hannah.yang@austindailyherald.com

Sparks were flying inside a garage at Roger and Sons.

Roe and Brett Naylor were busy assembling what would become hunting stands for the upcoming John Zgoda Memorial Disabled Veteran Deer Hunt, which is held by the Sons of The American Legion each year. The hunt is held at a summer camp for crossing guards that’s administered by the Minnesota Highway Patrol, known as Legionville.

These hunting stands are different, however, because of the steps leading up to the stand as well as the enlarged space to accommodate more individuals or any other needs a disabled veteran may have in order to hunt comfortably and with as much independence as possible. Around three were made, which will be delivered up to Legionville this week.

The hunting stands up at Legionville have been worn by weather conditions and aren’t as stable as they once were. Made from wood, it was clear to the American Legion Riders Post 91 in Austin that this wasn’t suitable for the veterans who just wanted a chance to relax and enjoy the outdoors without having to worry about being inhibited. 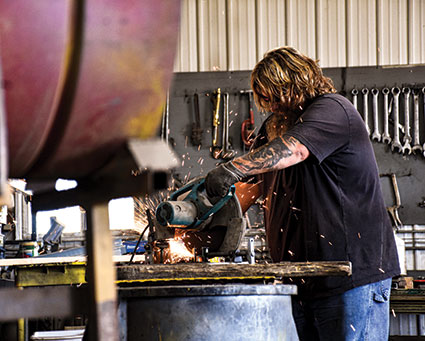 Roe Naylor, president of the American Legion Riders Post 91 chapter in Austin, cuts through pieces of metal that will eventually be used to create deer hunting stands.

“We hope that these last a little bit longer,” Brett said while patting a support for the hunting stand. “We want them to be a little more comfortable and sturdier to move around. They were getting old and needed to be replaced.”

Throughout the week, members of the Austin chapter went to work assembling the metal hunting stands. Eventually, a roof will be placed on top and handrails will be added to the steps that lead into the stand. It takes several hours to assemble the hunting sheds, and over the span of a week, piles of metal turned into a structure that will eventually be accessible to disabled veterans.

“We don’t want to make them cry,” Brett said. “A lot of them are emotional about this kind of stuff. We had someone say just last week on how awesome this was, and that he couldn’t say that enough.”

To achieve this, the American Legion Riders Post 91 Austin chapter held fundraisers to help with their various service and community projects throughout the year. By receiving donations, the chapter was able to raise about $1,300 to help fund building the hunting stands. 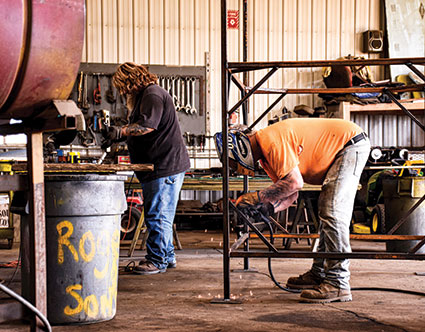 Roe Naylor (left) and his brother, Brett Naylor, weld and cut through pieces of metal that would eventually be part of the hunting stands they’re building. American Legion Riders Post 91 of Austin are building accessible hunting stands for disabled veterans to use comfortably and easily at Legionville, north of Brainerd for the annual deer hunt.

“We got a phenomenal deal on some iron from Akkerman out in Brownsdale,” Roe said. “They donated quite a bit of iron and plywood, which is huge, and we’ve had so many local people who prepaid for things under our name. When people heard about this, they thought it was a neat idea and wanted to help out and contribute.”

“There was someone who donated some hunting chairs from Cabela’s,” he added. “He bought them, and just gave them to us. We also had people purchase plywood at the Austin Builders under my name, and I could go pick them up. It’s phenomenal in how much support we’ve had.”

Six veterans are chosen to go on an all-expenses paid hunting trip to Legionville, where everything is taken care of for them. Many who have served overseas and experienced trauma may have not been able to do outdoor activities that they loved, like hunting. These stands are able to be moved, and that means additional hunting locations for the veterans who may have had to stay put in one place for the hunt. Perhaps even more veterans can be included on the hunt because of the new hunting stands.

Although these stands may not seem much to those who don’t hunt, it means everything to the veterans who can enjoy something that they may not have been able to because of their trauma or injuries.

“They served us, and now it’s time we serve them,” Brett said. “We’re giving back to them. This project has got to be my favorite one that we did so far. We’re making them happy, and letting them keep their dignity by letting them do things they like to do and used to do.”

ADAMS — It’s been 50 years since Cedar River Golf Course has stood in Adams, offering the community a place... read more