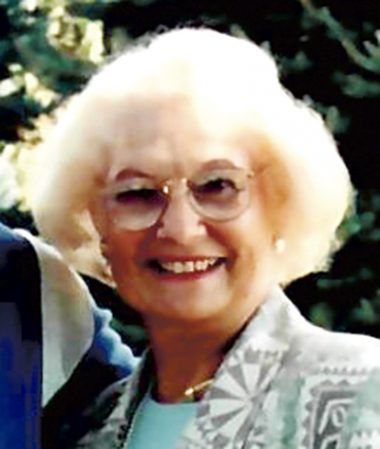 Bernyce was born on Dec. 18, 1924, to Casper and Mary (Prem) Junglen in St. Cloud, Minnesota. She was the baby of 15 siblings. Bea, as she liked to be called, graduated from Cathedral High School and then went to work for Sears, where she was employed through 1989. She met a young Marine named Dewey and instantly knew he was the one. They married and were inseparable companions for 65 years. They shared a love of golf and felt fortunate to be surrounded by so many great friends in Austin, Minnesota, their home since 1952. They adopted two children, Jode and Scott. After Dewey’s (Dwaine) death in 2011, Bea battled dementia until her death. Though her world became confusing and sometimes frightening, she met dementia head on with strength, ice cream and a smile. A good day included pancakes at Perkins, a ride in the car, coffee at Hy-Vee with friends and Wheel of Fortune. She found great comfort in her faith through the Catholic Church. Each day started and ended with a rosary.

Bea was preceded in death by her husband, Dwaine; her parents; and all her siblings. She is survived by her children, Jode, San Jose, California, and Scott, Austin; and many nieces and nephews.

The family is grateful to the Austin Mayo Medical Center, the Senior Center, St. Mark’s Nursing Home, Heartland Hospice and the many angels in Austin who assisted her on her journey.

A memorial mass will be celebrated at 11 a.m. on Thursday, Sept. 26, 2019, at St. Edward Catholic Church with Father James Steffes officiating. Visitation will be one hour before the service on Thursday at the church. Clasen-Jordan Mortuary is in charge of arrangements.

Walmart to stop selling electronic cigarettes at its stores