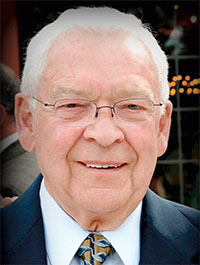 Benjamin King was born May 31, 1930, on the family farm in rural Mower County, Minnesota, to Benjamin and Clara (Quast) King. The King family later moved to their farm just north of Mapleview, Minnesota. He graduated from Austin High School with the Class of 1948. Ben married Gloria Jean Buck on June 3, 1950, at First United Methodist Church in Austin. Ben served in the U.S. Air Force during the Korean War from 1952 to 1955. While stationed at Two Harbors, Minnesota, Ben and Gloria welcomed their first child.

After serving in the Air Force, the family moved back to Austin, where they welcomed five more daughters and raised their family. Ben worked at Hormel Foods Co. for 40 years. During retirement, he worked at the Austin Hy-Vee Food Store for 24 years. Ben and Gloria were married for 43 years before Gloria passed away in 1993. Ben was married to Lois Shaw in May 2001.

He grew up attending the First United Methodist Church in Austin, where he was a faithful member and usher. Ben was a proud and loyal sports fan of the Twins, Vikings, Timberwolves and all Austin High School sports teams. He enjoyed attending the stock car races at the Chateau Speedway in Lansing. He was a lover of animals, especially horses and dogs, and enjoyed gardening and maintaining a beautiful lawn. Most of all, he loved his family, especially his six daughters.

Funeral services will be held at 11 a.m. on Saturday, Sept. 21, 2019, at First United Methodist Church with the Rev. Dr. Donna Dempewolf officiating. Visitation will be from 4-7 p.m. on Friday, Sept. 20, 2019, at Clasen-Jordan Mortuary and will continue for one hour before the service on Saturday at the church. Interment will be at Oakwood Cemetery with Olaf B. Damm VFW Post 1216 and Austin American Legion Post 91 in charge of military rites. Memorials in Ben’s memory may be directed to the First United Methodist Church, Ben’s family or donor’s choice.