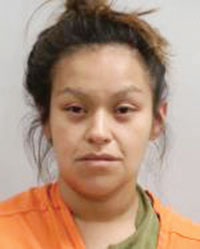 According to the court complaint, police were dispatched at 7:20 p.m. on Wednesday that Navarro Renteria had abandoned a six-day old infant in a 2003 Dakota Dodge in the 700 block of 11th Avenue Southwest. Before police arrived, the reporting party said the infant had been removed from the vehicle and was at a nearby residence. Police also learned Navarro Renteria was last seen walking from the area heading in a northeast direction.

An officer located Navarro Renteria walking in the alleyway behind a residence in the 700 block of 11th Avenue Southwest. Police observed Navarro Renteria smelled of alcohol, was slurring her speech and had bloodshot eyes and poor balance. She told police she had “three beers,” but denied driving a vehicle. She claimed she had come to the location to see Joel Kenneth Bearfield and said the he had placed the infant in the car. She then claimed Bearfield had been driving before admitting that she had been driving. She also Bearfield had “T-boned” the Dodge with another vehicle he was driving and that the incident occurred a few blocks away.

An officer had Navarro Renteria perform four field sobriety tests, all of which she failed. She was arrested and taken to the Mower County Jail, where a breath sample showed she had a blood alcohol concentration of 0.13.

A relative of Bearfield arrived on the scene and was informed of the situation. She reported that Bearfield and Navarro Renteria had been fighting for approximately two weeks. Police informed her that they had a warrant for Bearfield’s arrest and she let them into the residence, where they took him into custody.

A review of Navarro Renteria’s criminal record shows prior convictions for DWI and assault on a peace officer. She recently pled guilty to felony third-degree drugs-sale-narcotic.

An initial court appearance has been scheduled for Oct. 3.