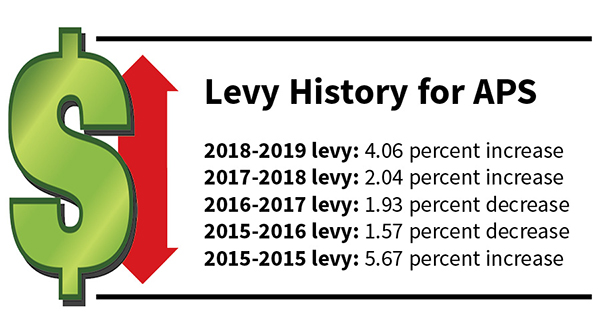 The proposed operating levy and budget for the Austin Public Schools District was approved during Monday’s special board meeting.

While the percentage of the proposed levy increase seemed high, Director of Finance and Operations Lori Volz said that when breaking down the revenue sources that make up the district’s general fund budget, the levy only consists of  5.63 percent of the total revenue.

State aid comprised the majority of the revenue source at 82.29 percent, federal aid at 4.19 percent and other miscellaneous items at 7.89 percent. Volz noted that “the levy is a small portion of the overall fund.”

School district levies are different from county or city levies because their limits are dictated by state statute. Districts can choose to certify a specific dollar amount for their levies, but must not exceed the levy limit set by the Minnesota Department of Education and the levy amount can be decreased.

Officials also approved the Truth-in-Taxation hearing for Dec. 9, during their regularly scheduled board meeting for the public to make comments and let their opinions be known.

Photos: Southgate students step out for a walk