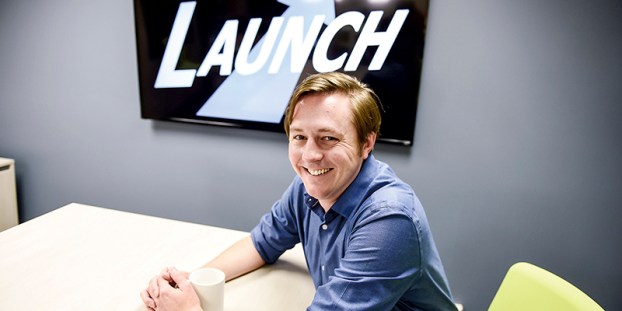 Sean E. Williams is the entrepreneurial ecosystem builder for LAUNCH, which provides entrepreneurs an office setting in which to work. Eric Johnson/photodesk@austindailyherald.com

A place for business: LAUNCH provides space for entrepreneurs to work

Within recent years, there has been a steady, but insistent push to support the small business community throughout the country.

Whether through start-up grants or initiatives like Austin’s own Eat.Drink.Shop.Austin, cities and states are putting extra emphasis on helping small business reach and maintain a state of sustainability.

But even with this push, building a start-up from the ground up is never easy. It’s filled with risk and cost that can make the effort daunting, but a local organization in Austin is doing its part to help bridge those gaps.

LAUNCH Co-working Space, which opened in 2018, provides a place from where entrepreneurs can do business.

The space, located at 109 First Ave. SE, Suite 4, is filled with desks and two office spaces, along with a conference room for meetings. However, the offices  are only available when not already claimed. From here, people who are either just starting a business or have a business that doesn’t require a large space can operate without the overhead costs of renting an entire space.

In short, it helps establish a business.

“The concept is to empower and enable entrepreneurs here in Austin to grow and succeed,” said Sean E.Williams, entrepreneurial ecosystem builder for LAUNCH.

Williams himself is a product of LAUNCH, having used it as a place where he could get away and concentrate.

“I started out as a member here because I needed to get out of the house,” said Williams, who is also co-owner of Comicker, an online graphic novel publishing company. “Just the efficiency that comes with an office outside of your home as well as the benefits of socializing with other people can’t be overstated.”

For the most part, LAUNCH is simply an office. Those wishing to make use of the space can obtain memberships starting at $99 a month.

Depending on the membership purchased, people can either get desk space or, for the higher-end membership, an actual office.

Along with these memberships comes the use of wi-fi, scanning/copying/faxing, meeting space and even teleconferencing, all the way down to coffee and tea.

But these memberships go further than simply giving people a place to work. It is a location, an address on a business card. A small thing on the surface, but something very important for a small business or business just getting off the ground.

“It’s very important, both from a logistical standpoint, but then from a privacy standpoint as well,” Williams said. “As a publisher our business address is printed in all of our books, every book has our home address in it. It’s being able to take meetings in an actual office setting instead of your house.”

In a sense, it adds legitimacy to those people making use of LAUNCH.

The space has become ideal for a city that continues to grow thanks to the large entities that call Austin home. It’s an avenue for those coming into the city with a chance to reach for more.

“Between Hormel and Mayo and Riverland, there’s enough trailing spouses who are running their own businesses,” Williams said. “LAUNCH is a real application to connect with community and other businesses as well.”

In a lot of ways, LAUNCH has already proven its value to the community. In June of this year, the business hosted a roundtable discussion on small business with members of Sen. Amy Klobuchar’s office.

It was the ideal location to hold such a meeting. Throughout the meeting, discussion turned to how resources get out to the public and how they can be shared more easily.

“It’s challenging work,” said Neeloa Mollgaard during that meeting. Mollgaard is the executive director of Red Wing Ignite, a group dedicated to fueling economic development within Red Wing. “It’s about being stronger together.”

Which, in essence, defines what LAUNCH is trying to do.

“We’re trying to support the business community in Austin,” Williams said. “Pooling resources in a single place. Helping find more success. We really want to be a launch pad for services more than anything else.” 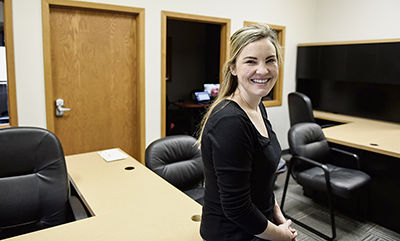 Betsy Morem is an accountant for small businesses who makes use of everything LAUNCH has to offer. She currently has membership for an office at LAUNCH.
Eric Johnson/photodesk@austindailyherald.com

Betsy Morem is one of those people making use of the space offered by LAUNCH. Morem is an accountant for small businesses. Initially Morem, who does the accounting work for 15 clients, was working from home. While convenient, it eventually began to wear on her working and living in the same space, an apartment above Main Street in Austin.

“I was just working on Main Street, living in my apartment, which got kind of old because I lived there,” Morem said. “I would go to the coffee shop every single day and work from there.”

Morem heard about LAUNCH through word of mouth and then sometime in March or April of this year, she went in, talked with Judy Lunde, who operated LAUNCH at that time, and signed up for a closed office on the spot.

“It’s nice because it feels like I’m going to work,” Morem said. “Before there was no separation between home and work.”

It’s the accessibility that is part of what stands out about LAUNCH. Morem, and any other client with a membership, can come in and work at any time. It fits the schedule of the member as they see fit.

“I think a lot of places you kind of have to be here during certain hours,” Morem said. “Here, you can come and go as you please.”

LAUNCH will continue offering things like StartUp Factory, which is a year-long course designed to help start-ups begin.

“There’s course work, customer discovery, market research — all the ground up things you need to have a successful startup,” Williams said.

Williams went on to say that more will be added in time as Austin Community Growth Ventures, the charitable non-profit that operates LAUNCH, looks into the future, which could involve growing space and growing the programs offered.

For now, LAUNCH will continue moving forward to do anything they can to help those in small business grow.

“I would highly recommend it to anyone,” Morem said. “I always tell people around town about this place. It would be great to have more people. There’s gotta be a lot entrepreneurs in town.”

The Austin City Council will be voting to set the property tax levy for 2020 during its next regular meeting.... read more