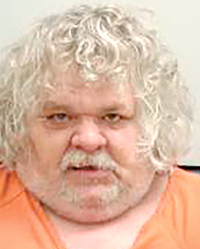 According to the court complaint, a local funeral home alerted the Mower County Sheriff’s Office on July 27 that threats had been made toward an upcoming funeral. A hospice worker for the deceased reported that a relative of the deceased, Lewison, had threatened to shoot and kill everyone at the funeral.

On July 28, a deputy spoke with one of Lewison’s relatives, who said Lewison had told another relative that he would come to the funeral and kill everyone there with an Uzi submachine gun and pipe bombs. He said Lewison said a similar thing to him, but did not mention pipe bombs. He was not aware if Lewison had any guns or bombs, but said others were concerned for their safety and did not want to attend the funeral. He described Lewison as having “a lot of rage.”

The deputy made contact with another relative, who said he had seen Lewison a few days earlier and that he was “acting very odd,” was “screaming for 15 minutes straight” and had threatened to shoot him “right where I stood.”

He also said Lewison threatened to shoot and blow people up at the funeral, indicating he would use an Uzi he had hidden in a tree and a pipe bomb he had made. He also indicated Lewison said he would commit suicide after killing everyone at the funeral.

The relative met with a detective and said he and his wife had gone the Lewison’s Rose Creek residence on July 27 and made contact with a woman who lived with Lewison, though he was unsure what their relationship was. He heard Lewison shout, “I’ve got a big knife and I’ll kill you.” When they went inside, Lewison shouted the entire time and threatened to kill another relative whom he believed had stolen from him. He also claimed to have an Uzi wrapped in a burlap sack hidden in a tree. Before the relative and his wife left, Lewison pointed at them and shouted, “I’m going to kill you and I’m going to kill you,” then said he had pipe bombs that he was going to use to “blow all them (expletive) up.”

He described Lewison as being “high on something” and suspected it was methamphetamine.

The hospice worker told the deputy that Lewison commented he would “take everyone out” at the funeral. Another relative stated other relatives were concerned and were afraid to attend.

Detectives conducted surveillance on Tuesday of Lewison’s residence in the 100 block of Third Street South in Rose Creek. When they saw him, they identified themselves before arresting him. Lewison starting to yell and swear and was shaking. The woman who resided with him stated Lewison was having a “dizzy shaking episode,” saying he had them about twice per day. The detectives allowed him to lie down and let it pass before taking him to jail.

Law enforcement executed a search warrant on the property and found and seized the following:

The woman described the THC wax manufacturing process and said Lewison had been making THC wax for about a year and sold some to his friends.

A review of Lewison’s criminal record shows prior convictions for domestic assault, terroristic threats, obstructing arrest, harassment and violating an order for protection.

Lewison will appear in court again on Aug. 15.

Drivers can no longer hold phones in hands while driving; New law went into effect on Thursday

St. Paul — To help reduce fatalities and injuries on Minnesota roads, drivers in Minnesota can no longer hold a... read more