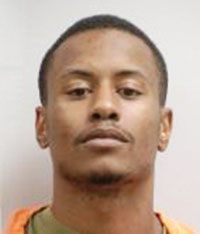 According to the court complaint, police were dispatched regarding a firearm complaint at 1:15 a.m. on Friday to a residence in the 300 block of 12th Avenue Southwest. On the way they learned that a suspect, later identified as Mcgruder, and an unidentified male left the area in a 2013 Dodge Durango.

A woman at the residence told police Mcgruder and the other male were “lurking around” the back of the residence. She said Mcgruder came to get his two-year-old daughter, whose mother allowed him to take her. She then said an argument ensued and Mcgruder said, “You all better stop playing games. I am about to go to the vehicle and get my (expletive).”

The woman said the other male was trying to prevent Mcgruder from going to the vehicle to get a gun. Mcgruder handed the child to the other man before pulling a pistol with an extended magazine from the front of his pants and waving it in the air. She ran inside and locked the door and Mcgruder began to strike the back door with the gun. He and the other man then left with the child in the Dodge.

Another resident at the house confirmed Mcgruder had been “lurking around” the residence and that he had brandished a gun after getting the child.

The child’s mother told police she did not want to be a part of the situation because she was afraid of Mcgruder and did not want him around.

Mcgruder later texted the child’s mother a video of the child on a couch. One of the women recognized the voice of a woman in the video and told police Mcgruder might have been at a residence in the 1000 block of Seventh Street Southeast. Police went to the residence and knocked on the door. Officers observed Mcgruder getting up from the couch in the living room, grab something from the corner of the room and walk quickly to the northwest part of the residence. Officers knocked for several minutes before a woman at the residence answered. She confirmed Mcgruder was in the residence. Mcgurder later came out and was arrested. Officers observed he had a cobweb stuck in his hair.

Police asked the woman if they could search the residence for his handgun. She denied there were any guns in the residence before telling officers to leave. Police maintained a perimeter and received a search warrant, which they executed at 4:02 a.m. They located a loaded Smith & Wesson .40 caliber pistol in the corner of the basement near some recently disturbed cobwebs.

Mcgruder was taken to the Mower County Jail and the child was returned to her mother.

A review of Mcgruder’s criminal record shows a prior conviction for terroristic threats.

Mcgruder will appear in court again on Aug. 15.

City encourages owners to inspect trees on their property

By Craig Byram Attorney for the City of Austin Following severe storms like Austin experienced recently, the city receives many calls... read more