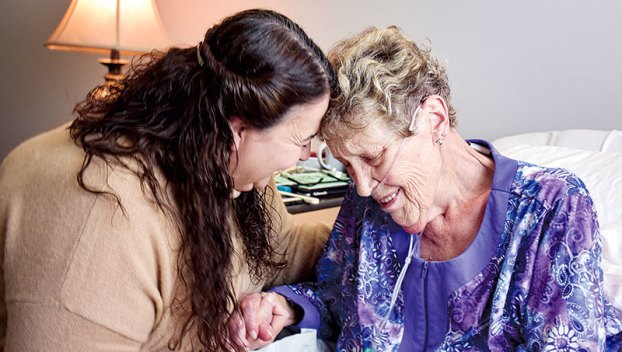 Deidra Burke and Carol Larick both recollected their friendship that blossomed after Burke renovated the former Brownsdale Elementary School into the Legacy of Brownsdale assisted living center. Larick, a former Brownsdale city councilwoman and a supporter for Burke’s project, was diagnosed with an aggressive form of lung cancer last month. She will spend her remaining days at Legacy. Hannah Yang/hannah.yang@austindailyherald.com

Lasting Legacy: In her last days, Carol Larick reaffirms love for Brownsdale and the people in it

BROWNSDALE—Just as Carol Larick stood by Deidra Burke’s side as she took on renovating the former Brownsdale Elementary School into an assisted living center, Burke finds herself by Larick’s side in the remaining days of her life.

It was only last February that the former Brownsdale city councilwoman helped give tours of the Legacy of Brownsdale during its grand opening. There was no sign that Larick, 77, was ill. She maintained her usual kind and witty personality. However, she discovered last month that she was diagnosed with an aggressive form of lung cancer and it had progressed rapidly. Larick moved into Legacy a couple weeks ago, knowing that her time will come soon.

So on Tuesday afternoon, Burke walked down the hallways of what used to be the former elementary school, and reached the end of one wing. Larick’s name was posted outside of an apartment door, and with a gentle knock, Burke entered the room.

Being someone who owned and operated the assisted living center, Burke admitted that she had her fair share of taking care of the aging patients who come to spend their last days comfortably in a homelike setting as opposed to a hospital bed. Yet, the toughest part of her job is saying goodbye.

“It’s one thing moving in someone you didn’t know as a resident,” she spoke softly. “It’s another thing, when you’re moving someone in who you have a relationship with.” 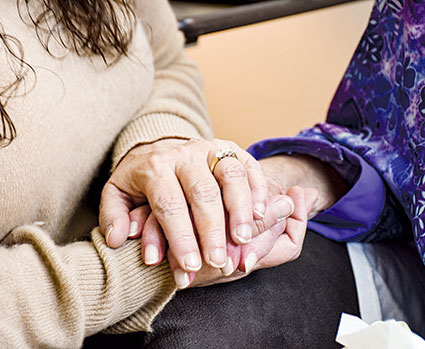 “You’re an amazing woman, Carol. Yes you are.”
Deidra Burke, Legacy of Brownsdale

Inside Larick’s apartment, she was reclining in a comfortable armchair with pillows fluffed and laid out in a way that would support her taking long naps. She was sleeping, having been given medication.

Taking a seat by Larick’s bedside, Burke reached over and grasped her friend’s hand. These days, Larick has been sleeping longer periods of time, and using all her strength to speak just above a whisper. Her grandchildren visited a couple weeks prior to say their goodbyes. Though it is uncertain when, it could be any day and that uncertainty meant every minute was precious.

If there was evidence of Larick being afraid, she didn’t show it. She acknowledged Burke’s presence, and gripped her hand for comfort. She was very tired, but her friends would sit by her side all day and night, taking in the quietness together. Sometimes, just being present was all that was needed when words didn’t seem sufficient enough.

Taking sips of water to quench her thirst and struggling to speak, Larick still held Burke’s hand and tried to hold her eyes open as she spoke. Summoning her inner strength, Larick wanted to talk to Burke and let her know what was on her mind.

“I wish I could do more to help you,” Larick said hoarsely. “I want you to know how proud I am of you, and of what you’ve done. I’m proud of this structure and all that you’ve done.”

Those words affected Burke, whose eyes brimmed with tears. She gently kissed Larick’s forehead and shook her head at the woman’s statement. This was the same woman who had strongly supported Burke’s vision in taking a devastating situation and turning it into a physical representation of Brownsdale’s commitment to supporting their loved ones through thick and thin.

“I did nothing,” Burke said through her tears. “We did this. I didn’t do this by myself.”

“You saw a picture,” Larick responded in a firm whisper. “We didn’t know that everyone would work toward it. We saw something. We did it … you’re my angel.” 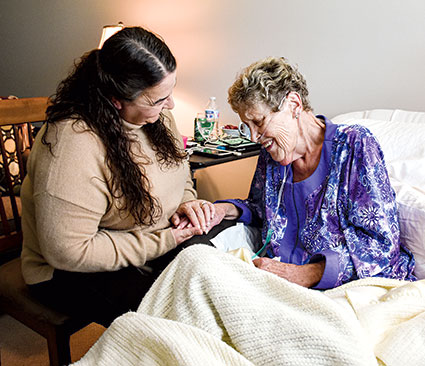 Sharing in this vulnerable and intimate moment, the two friends recollected their time together on the project. Despite the town being challenged with the school’s closure, Burke approached the city council about purchasing the building and turning it into an assisted living center.

Larick was on the council during that first meeting and was the first one to fully extend her support to Burke. All five city council members voted to approve the sale for a dollar, of which Burke fondly remembered.

“Remember Carol? You talked to me and said, ‘You and I are a lot alike. We’re both brazen women,’” she laughed, to which Larick cracked a smile. “We’re a couple brazen women we are.”

“(Brownsdale) is a great place to live,” Larick whispered. “We need to have a wonderful place for our children. I’ll always be proud of Brownsdale. I want this town to have pride in itself. It has always been a grand little town and we need to continue that pride.”

A closed school where children who were starting the beginning of their lives now could become home for those near the end, thanks to the Brownsdale City Council, Larick and Burke, as well as the full support from the residents in Brownsdale.

Currently, the center is at 60 percent capacity and more people are coming to make this place their home.

“You know, it’s fun naming this place Legacy of Brownsdale,” Burke beamed. “It’s like leaving a legacy for you and me. For you supporting it, and for me building it.”

As a way to always remember Larick, Burke designated an area near the center where a memorial garden will be created and be named the Larick Memorial Garden. A magnolia tree will be planted and a plaque dedicated to Larick will be installed.

Magnolias were a special flower to Burke, who had planted magnolias for her children when she lived in Blooming Prairie. They were her favorite flower, and she felt that it was fitting to have magnolias represent Larick’s and her vision of a new beginning for Brownsdale. Magnolia trees will continue to be planted in the garden whenever a resident passes away.

Now that her legacy is permanently kept and feeling assured that Brownsdale will continue to thrive, Larick felt at peace. She was home, and that’s what she always loved.

“I always take pride in this town,” she whispered. “Lots of generations went through these doors. A lot of good people did. We will have this. We love our little town. God bless us all.”

With that, Larick sank into a deep sleep. Gently patting her hand, Burke told her that she would stop in again before heading home for the night.

“We love you too, Carol,” Burke said. “You’re an amazing woman, Carol. Yes you are.”

A tale of two Austins: Jason Baskin has found himself at the receiving end of Austin, Texas, complaints

When Jason Baskin was elected to the Austin City Council, he was looking forward to listening to and serving the... read more