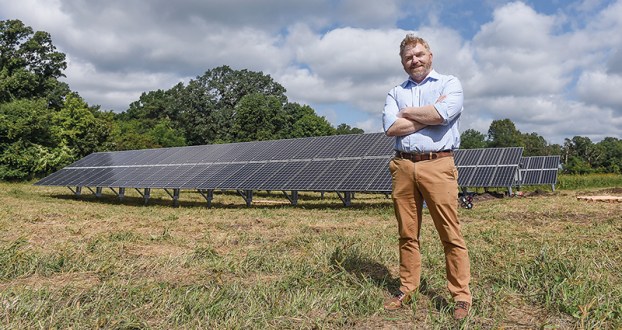 IBI Data President Geoff Smith stands in front of the solar panels being installed behind the business in Brownsdale. Eric Johnson/photodesk@austindailyherald.com

BROWNSDALE — IBI Data has had a reputation over the years of including strong support of healthy goals for its employees, but now it’s also included being better stewards of the environment.

Situated in an open patch of land behind the main building are rows of solar panels, soaking up the sun and providing an energy break for the company.

Along with the solar array, IBI has completed a major lighting retrofit, which included replacing fluorescent and metal halide bulbs with new LED fixtures.

It’s estimated that this investment in clean energy will cut energy costs by 63 percent in the coming years, which equates to a savings of nearly $900,000 in energy use over time.

“Our cautious estimates were for a 52 percent energy savings, so we’ve been thrilled to see how things are coming together,” said Geoff Smith, president of IBI Data. “This project was not only the right thing to do for the environment, it has made tremendous business sense for us as a company.”

A big boost in the project MinnPACE (Property Assessed Clean Energy) financing. The company provides financing for businesses, farmers and non-profits, which is used for solar panels, among other things. 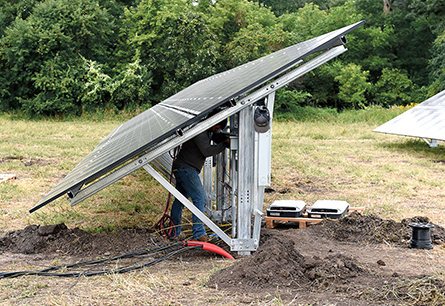 An employee of Solar Connections out of Rochester, works on wiring the solar panels behind IBI Data in Brownsdale. Eric Johnson/photodesk@austindailyherald.com

It allows property owners to invest with no up-front cost. Instead, those receiving the financing repay MinnPACE over time with the money saved from the projects.

The solar panel project got its earliest beginnings in December of 2018, after IBI completed its lighting retrofit.

“It was around that same time that we reached out just to find out what the options were,” Smith said.

The business eventually settled on Solar Connections, out of Rochester, who then set about helping line-up the financial resources with IBI.

“They really took the lead on getting us connected,” Smith said.

The returns are expected to be just as noticeable as the lighting retrofit, which has saved the company about $1,500 a month in the face of an $3,000 average monthly bill previously. The solar panels are expected to add another 20 percent savings.

On Thursday, Solar Connections were onsite wiring the panels, which totaled 140 panels spread among the three rows. They are expected to be up and running as of October this year; however, the real efficient results probably won’t be seen until next spring, when the sun starts moving higher in the sky.

The solar panels, however, are just one part of the project. The other part is the planting of pollinator gardens next to the panels. 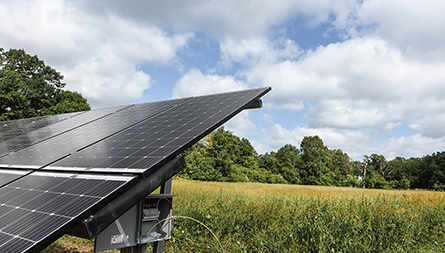 Just some of the pannels in the three row array, sitting underneath the partly cloudy Thursday morning behind IBI Data. Eric Johnson/photodesk@austindailyherald.com

IBI has been working with Shooting Star Native Seeds, located near Spring Grove. Each and every plant included in the mix is pollinator friendly and is designed to grow to a max height of two and a half feet tall so as not to block the incoming sun.

The planting was a relatively new addition to the project. Early on in the project, the panels were going to be placed on the roof, but concerns arose in the face of the massive amount of snow this past winter. It was feared the combined weight in the future might be too much, so it was decided to move the panels to the ground.

That’s when the pollinator garden was conceived.

The original thought, however, came before the project when Smith visited the Minnesota State Fair.

“I saw it last year at the state fair that this was a trending thing,” Smith said, adding that he was reminded again when talking with Danielle Heiny at Riverland Community College. “It’s a really natural fit for us.”

This environmentally friendly initiative has also fit well with those clients working with IBI.

“Our clients, they want to have relationships with companies that have these values,” Smith said.

However, this move was also timely in a financial sense. The federal tax credit IBI received will start going down in the coming years.

According to the website www.energysage.com, over the past few years the rate has been steady at a 30 percent deduction off federal taxes for the cost of installing a solar energy system. However, after this year the rate will drop to 26 percent in 2020, followed by a drop to 22 percent in 2021. After that, the rate drops right off the table to 10 percent.

With the completion of this project, Smith said they will probably sit back and take a break, but that doesn’t mean there isn’t an eye on the future.

“I could see us getting an energy audit to see where we’re at, but I think we’ve picked the low-hanging fruit for right now,” Smith said.

At the same time, though, Smith urges for others to take a look at doing something similar.

“I would really encourage other businesses and farmers to look into this,” he said. “It’s a tremendous benefit to the environment and the bottom line.”

The Minnesota Department of Education on Thursday released the 2019 North Star Accountability Report, which showed that APS was faring... read more