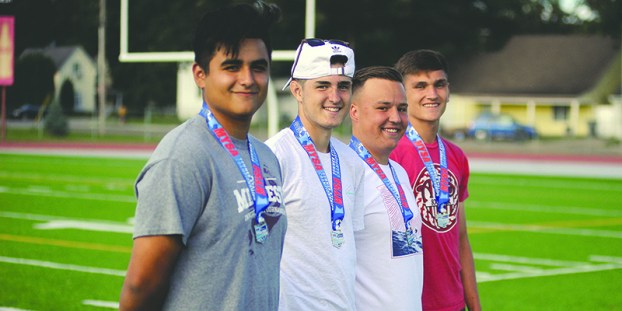 Goal of the game: Through hard work and dedication, Austin soccer continues to grow

It was a hot day in late June on the soccer fields at Todd Park and Joel Thawng is giving it his best against players that are at least three years older than him.

The older players on Austin’s U16 team do not mock or tease Thawng, they push him and motivate him, realizing he is the future of Austin soccer and they are the present. Thawng and his U13 team went on to win an MYSA state tournament this summer and the U16 team was one of two Austin teams, the other being the U17 team, to make it to a C1 state tournament — the most in program history.

Austin U13 head coach Thor Berg said he’s seen the wonders that can happen when older players interact with the younger players as he’s had some of the older players come into his team’s practices this summer. 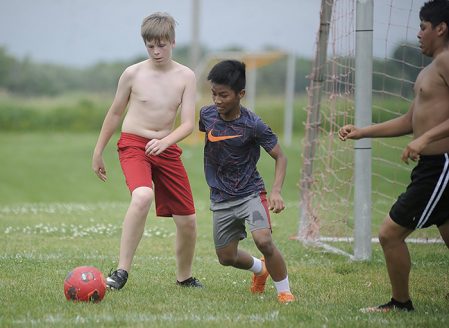 Joel Thawng, center, of Austin battles with the Austin U16 boys soccer team in practice earlier this season. Thwang was on the U13 team that won state, but he spent plenty of time practicing with older kids to improve this summer. Herald File Photo

“The young kids totally look up to them,” Thor said. “When we would run a drill, the older players would show them how to do it, and whatever the older kids said to the U13 players was divine. It’s great to see kids want to give back.”

This past summer was the best in Austin Youth Soccer Association history as three teams — U12, U13 and U18 won state titles — and two teams — U14 and U17 — took second place at state. Seven Austin teams qualified for state and there were a total of 202 players on 13 teams this summer.

AYSA is run completely by volunteer coaches and there are no tryouts. Still, Austin was able to find success against metro area teams that that are often able to pick and choose their 15 players from a group of nearly 100 players who show up for tryouts. Those teams also charge their players significantly more money to compete than AYSA does.

“It’s tough for us to compete, but they compete and they do well,” said AYSA president and U18 coach Cory Goetz. “This summer raises the bar for sure. We’re exceeding what we’ve done in the past, but we’re still not at the highest levels of soccer. Our goal is to continue to strive and to continue moving teams up from the lower levels.” 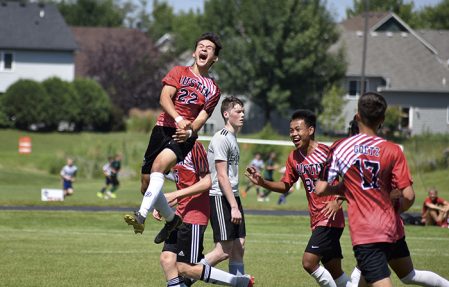 Austin’s Kevin Ortiz celebrates scoring a goal for the Austin U18 boys soccer team recently. The U18 boys were one of three Austin teams to claim a state title this summer. Photo by Jackson Goetz

Austin’s U18 team had a huge group of varsity players on it but the team settled for second place in state for the past two years. This summer, the U18s went 14-0-0 as they ran to the state title.

“We were kind of disappointed that we lost the last two years in the finals. This was one was big for us because it was the last time we’d play with all of the seniors. We wanted to have a big season,” said Dylan Hannegraaf, who will be a senior this fall. “There’s a lot of young talent coming up and that’s what it’ll be like in the fall. We have some seniors and a lot of good, young players. I’m looking forward to it.”

Ramon Hernandez filled in at goalie in his first summer playing on the U18 team. He noticed a group of players that were hardwired to compete and driven to share the ball when it mattered most.

“We kept talking and communicating (throughout the year),” Hernandez said. “Most teams start trying to score and get the glory for themselves towards the end of the game. We tried to keep the ball moving to create opportunities.”

Goetz has coached the majority of the U18 team since they were 10-year olds. His son Keaton played on the team, but Cory said they all felt like family to him.

“You feel like a little bit of a proud dad or a proud uncle looking back. Honestly, a cinder block could’ve coached this group as well as I did. They’re all so talented, they all get soccer and they understand what they need to do. They’re a product of their own hard work and their own desire,” Cory said. “You’re doing it to see them develop as players and as people. Kids get a lot of value out of being on a team and they build people skills, while working together. It’s fun to put in a lot of time and then see them have this kind of success.”

The seasonal dome at Wescott has boosted the soccer program in Austin, but so have the team pasta parties, the hang out sessions, and the inspired practices. Makias Anderson of the U18 team said his team wasn’t just trying to win for itself, it wanted to win for all of Austin soccer.

“I think the younger guys have been watching the older guys, and even us when we were younger, we would watch the older guys and be inspired,” Anderson said. “It’s kind of been a chain reaction all the way down. We’ve all been pushing each other to be better from top to bottom.”

Austin racked up a lot of wins this summer, but the kids who played also picked up valuable lessons of sacrificing their own glory for the success of a greater cause. That’s something that will stick with them as they grow into adults.

“You learn as you get older that you can’t play one-on-one soccer, you can’t just dribble the ball all the way to the net,” Thor said. “You’ve got to work with your teammates, just like in life where you have to rely on other people.”

Back on track: Carrier takes over as head football coach at LO

LEROY —  There are some questions circling the community of LeRoy this year, but the dedication of the LeRoy-Ostrander football... read more