Dunlap: One of Symphony’s strongest supporters

Austin is one of the very few communities of our size to support a symphony orchestra, and we have been doing that for 62 years. 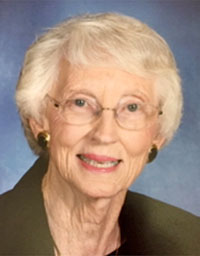 Marge Dunlap is one of the Austin Symphony’s strongest supporters.  And it’s just as well, as she performed with the very first orchestra all those years ago.

She played viola at that time, but after 14 years, she switched to violin and continued to play in the symphony for 36 more years, until 2008, when she was 80. She went on to serve on the symphony board in 1973, became secretary in 1975 and was the symphony’s business coordinator from 1994 to 2015.

She describes that management role as working to make each concert like a party in her own home, being attentive to all the detailed arrangements so everything would run smoothly.  Those who know Marge would attest to the fact that no detail is too small for her to note and to handle with diligence.

Since her retirement from formal association with the symphony, she continues to be a huge booster. Marge credits some of her continued interest in music to her husband, Gene, and his devotion to teaching music to youngsters. He was an original member of the board of directors in 1957 and also played in the symphony.  Gene died in 2013.

Marge started piano lessons at age five and violin at age 10. When she got to seventh grade, she was placed in the first chair of the second violins beside a senior and she wonders what that student thought.

She graduated from St. Olaf College and then went on to complete a master’s degree in music education at Northwestern University in Chicago.

She came to Austin as a junior high and high school strings teacher and it was here that she met Eugene Dunlap who was the elementary band instructor. She said that he proposed at the end of the school year.  She said “yes,” but she had a trip to Europe planned with her college roommate. She wasn’t going to give that up, so she went to Europe, and married Gene after she got home.

In a 2007 news article, Mille Masse said: “Marge has been an ambassador of goodwill. She is the person who makes sure that those who come to perform with the symphony experience the warmth and hospitality of this community. She acts as a bridge between musicians and community members who open their homes and hearts to welcome and entertain artists.”

Marge cherishes her memories of outstanding performers she has met. Roberto Plano and his family are good friends through his several appearances here.  She was invited to his wedding in Italy, but couldn’t attend. Simon Estes gave her a hug and a kiss on the cheek on stage. Others she mentions are Konstantin Soukhovetski and violinist Arianna Kim, plus Phyllis Diller. These experiences may count as well-earned added compensation for all the hours Marge gave to her symphony management position.

At age 91, Marge still sparkles with energy. She spends her time with household things, keeping her home updated, and keeping up with her daughters and their lives by phone and with visits. She also walks and does an exercise routine every day.

Her advice for a full and rewarding life is “to live life to the fullest, think positively and be kind to everyone. Enjoy what you have, for we never know what is around the corner.”

For more information about the Austin Branch of AAUW, contact Sue Grove  sue.grove@riverland.edu  or Carolyn Bogott  csbogott@charter.net. The American Association of University Women, now AAUW, is open to anyone who has completed a two-year degree or beyond.  The AAUW welcomes men who support our objectives and there are student memberships available. AAUW has been empowering women since 1881.  We support equity and education for women.  Scholarships are offered, as well as help in litigation in cases dealing with sex discrimination.  We are the most important and highly respected research and lobbying organization dealing with women’s issues such as equal opportunity and job equality.