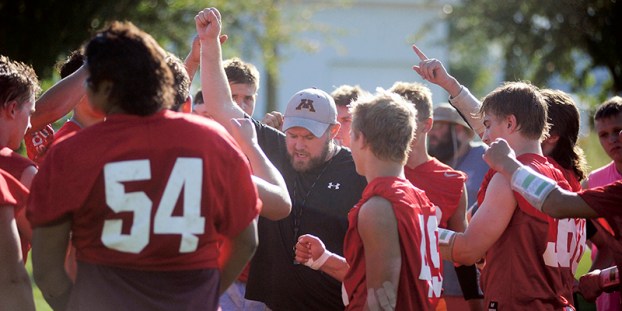 LeRoy-Ostrander head football coach Trevor Carrier, center, meets with his team after practice this week. Carrier is in his first year as head coach of the Cardinals. Rocky Hulne/sports@austindailyherald.com

Back on track: Carrier takes over as head football coach at LO

LEROY —  There are some questions circling the community of LeRoy this year, but the dedication of the LeRoy-Ostrander football team is not one of them.

Trevor Carrier has made the shift from offensive coordinator for the last six years to head coach and he said the Cardinals have already put in a lot of work this summer.

“We’ve had everybody show up.  Everyone’s really putting in the work and the coaching staff is putting in the work,” Carrier said. “The kids have come in committed. We know it’s a tough district top to bottom and it’s going to take lot of work.” 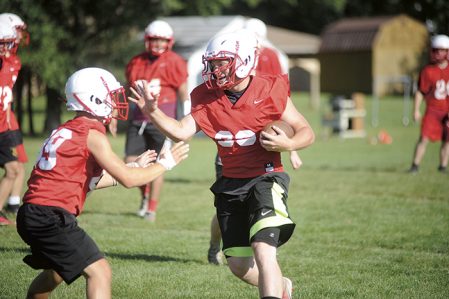 LeRoy-Ostrander running back Carter Johnson throws out a stiff-arm during practice in LeRoy this week. Rocky Hulne/sports@austindailyherald.com

The Cardinals didn’t field a varsity team in 2015, but they put together a record of 8-19 in the past three seasons former under head coach Aaron Hungerholt, with his son Trey leading the way at quarterback. Aaron resigned after last season and Trey graduated this spring, but Carrier feels LO has what it takes to keep moving in the right direction.

“It’s been a seamless transition. We didn’t get the (best) wins and losses (records) under Aaron, but it’s not the easiest thing to do in our district,” Carrier said. “We’ve had the championship come out of our district for six years in a row. I have so much respect for Aaron and I learned so much from him in how to run a program. We didn’t even have a youth program before he came here.”

LO senior running back and linebacker Carter Johnson may be more energized for the season than any other Cardinal. He missed much of his sophomore season with a knee injury, and he was hampered for a good portion of last season. 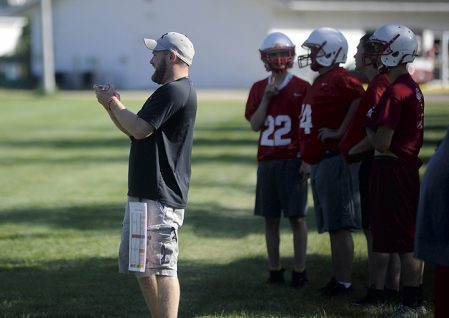 “I pushed it as hard as I could to get back to full strength as soon as I could,” Johnson said. “I feel a lot better this year. I want to go all the way this year.”

LO senior Riley Olson is expecting to provide a physical push on both sides of the ball this fall and he’s ready to go out and give it his all for his team.

“We’ve got everybody here going hard every day and we’re working hard and doing what the coaches want us to do,” Olson said.

Carrier and Hungerholt both faced short suspensions last winter before being reinstated as boys and girls basketball coaches respectively. The situation in LO was complicated when superintendent Jerry Reshtar recently stepped down leaving the school without its top administrator.

Carrier is focused on the future and he’s hoping the football team can bring some positivity to  the community. 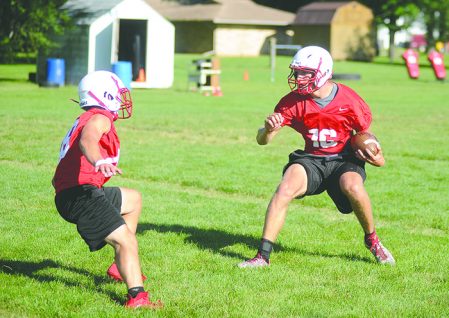 “We’re excited. There are a lot of things that have happened in the last year, but we told the kids to focus on our stuff and the things we can control,” Carrier said. “We’re excited for a big year. Our goal is going to be a state championship until I leave. People might laugh about that, but we’ve turned around a basketball program before and we’re in capable hands.”

The Cardinals will host Lyle-Pacelli to open the season at 7 p.m. on Aug. 30. 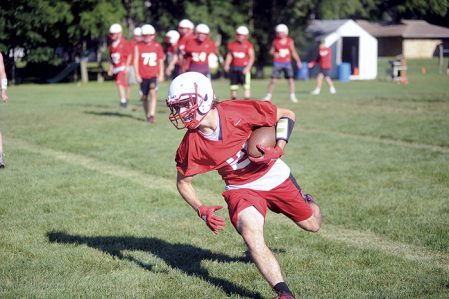 Isaac Collier hauls in a pass for LeRoy-Ostrander in LeRoy this week. Rocky Hulne/sports@austindailyherald.com

The Austin Post 91 Legion baseball team had its season come to an end when it went hitless as in... read more