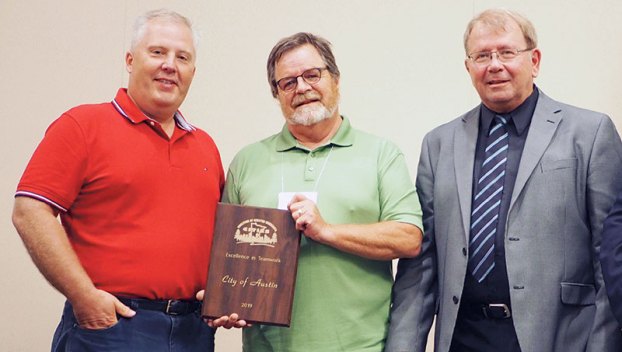 The Excellence in Teamwork Award is given to the elected officials and city staff from CGMC member cities who worked together to promote CGMC goals and priorities over the past year.

“It recognized our work when we welcomed the governor to Austin to highlight Local Government Aid (LGA) and the importance that plays in communities like Austin and across the state,” said City Administrator Craig Clark. “It was great to receive that recognition in that regards.”

In April, Clark, along with Mayor Tom Stiehm and staff from the Public Works Department, organized a successful press event at the city’s water treatment facility to highlight the need for an increase in Local Government Aid (LGA), which was the CGMC’s top legislative priority. In addition, Austin city leaders have been extremely involved in efforts to increase state funding for important grant and loan programs that help cities across the state pay for critical clean water infrastructure projects.

“We’ve talked extensively about the costs of updating our wastewater treatment facility,” Clark said, referring to an estimated $73 million price tag to upgrade Austin’s wastewater treatment plant to meet Minnesota Pollution Control Agency regulations. “Those that represent cities understand the hard work that cities do on a daily basis that people can take for granted, such as their sewer system, but it is a critical component and it’s some of the hard work that’s done. That’s why we brought the governor to the wastewater plant. It’s a significant cost and having him appreciate that and the role that LGA plays in the overall burden on our residents, whether it’s wastewater fees or the overall tax levy, keeping LGA vibrant helps keep our property taxes low and affordable for our residents.”

“Involvement from our member cities is what makes the CGMC strong, and the city of Austin is a prime example of why our organization has been able to achieve a lot of successes over the years,” said Ron Johnson, CGMC President and member of the Bemidji City Council. “The elected officials and staff in Austin are always willing to go above and beyond to help advance the issues that are important to Greater Minnesota communities.”

This year marked the first time a city was awarded the Excellence in Teamwork Award.

“They give a handful of awards and they thought this was a pretty big effort this legislative session,” Clark said. “It was nice to be able to receive that recognition.”

Law enforcement is warning the public to be on the lookout for a new scam involving a false rebate claim.... read more