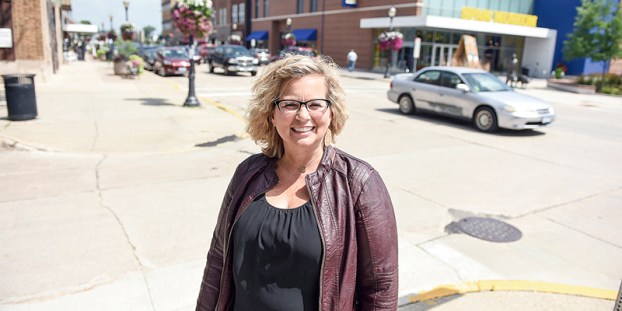 LIsa Reese, of Blooming Prairie, won her battle against breast cancer and will now be the honorary chair of this year’s Relay for Life. Eric Johnson/photodesk@austindailyherald.com

‘We will fight’: Lisa Reese to serve as 2019 Relay for Life honorary chair

Lisa Reese, 43, of Blooming Prairie was chosen as this year’s Relay for Life honorary chair.

The Blooming Prairie woman was approached to share her testimony of having defeated breast cancer with survivors and their loved ones who may have been struggling with treatments, or have passed away.

“I was very honored, and very excited to be that face for people to know that cancer is real and can affect anyone,” Reese said. “People can survive and that we fight hard. That’s what’s important.”

Relay for Life on July 26 will honor those who have gone through the battles of fighting against cancer and families who have lost a loved one to the disease or are currently supporting them through cancer treatment. This year’s event will be held in downtown Austin on Main Street.

“We are very excited to come together as one and light those candles to honor the people who lost their lives to cancer,” Reese said. “The candles are a great symbol of respect for the people who have gone through this. I feel they’re so close to finding a cure. They also find other ways to help us survive.”

A dream wedding, a battle against cancer

When Reese got engaged to her fiance Wes Gresham, 34, on Aug. 5, 2017, the two were excited to start planning for a wedding. Then, two weeks later on Aug. 21, Reese got diagnosed with stage-2 breast cancer.

She had just went in for her annual check-up at the doctor’s office, and at age 41, Reese decided to get her first mammogram. It was during this appointment that doctors revealed the startling news.

“They found a dense mass,” Reese said. “At that point, they immediately sent me to the Mayo Clinic in Rochester to their breast clinic, and did a biopsy which confirmed that I had breast cancer.”

It was not something that she ever thought would happen to her. Reese felt angry, having thought herself to be a relatively healthy person and had never called in sick to work. She never experienced health problems and didn’t feel any effects from the cancer that was growing inside of her.

“To be sick and have cancer…it was devastating,” Reese said tearfully. “I was scared. I have a daughter, and I was scared for her. I never had the genetic testing done, and I didn’t really want to know. Doctors told me it was more likely environmental, and I hope I don’t carry that gene. There was no family history of breast cancer for 100 years.”

Immediately following her diagnosis, she underwent six months of chemotherapy, followed by surgery to remove a dense mass that was attached to her chest cavity. Through all of this, Reese was also planning her wedding while Gresham stood by her side the entire time.

“Wes is a rockstar, I don’t even know how to explain it,” she said. “He wasn’t there for the initial diagnosis since I thought ‘I’m a big girl, I can go to appointments alone.’ Wes has not missed one since then. He has taken me to appointments, fed me…he’s been amazing. I was never alone.”

During her cancer treatments in 2017, Reese’s 20-year-old daughter Marnie was starting her first year of college at Rochester Community and Technical College (RCTC). She was studying to become a veterinary technician and is graduating next May. Yet, Marnie was never too busy to be there for her mom.

“It’s almost…my family is more important. I have cancer, and I’m fine,” Reese said. “But, they’re the ones that get forgotten. My daughter’s first year of college, she spent in my chemo room and watching me getting chemo pumped into me while studying during my treatments. It’s scary for an 18-year-old. I knew I was going to be OK. They didn’t know that. They think I could die.”

Yet, Reese felt herself grow confident in her fight. She found ways to keep her mind off of the cancer by focusing on work, hobbies and surrounding herself with a support system that consisted of Gresham, Marnie and the fellow Austin Area Chamber of Commerce ambassadors.

“The busier you are and the more support you have is what gets you through,” Reese said. “Knowing that, I was going to survive. I knew that I would come out ahead.” 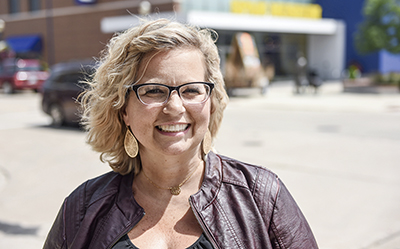 “… I feel complete again and not missing anything.” – Lisa Reese

“Doctors told me that it was very likely to be fixed and I would survive,” Reese said. “Early detection is everything. Get your mammogram. If I was stubborn, thinking that ‘I’m 43, I’m fine,’ then I would have been at stage 4. I was lucky. I did what I needed to do and had the best treatment in the world. I was extremely lucky to have caught it when I did.”

Whether someone has a religious faith or not, Reese wants others to have hope and said that the best thing to do when fighting cancer is to hold onto the belief that they will survive and win.

“They don’t have to be religious,” she said. “But, don’t stop believing in their ability to fight. They will fight. We will fight. The courage is in the people around you.”

One year later, Reese was deemed cancer free. Following six months of check-ups and participating in a study that monitors the effects of a new type of proton radiation treatment, she felt life had changed for her in a positive way.

The cancer didn’t take her life; rather, Reese found strength in her support and within herself. She also grew more empathetic toward others who may be silently fighting a battle of their own and may not have a support system.

Almost two years later after getting engaged and receiving cancer treatments, Reese and Gresham are getting married on Aug. 30. A month that was associated with happiness and then uncertainty will have her starting a new chapter, when many would have thought the story was over.

“My hair is starting to grow back, and I feel complete again and not missing anything,” she said. “There’s always a piece of me that feels like the cancer might return, maybe in a different form because that happens. But, I don’t live everyday scared anymore. I’m me again.”