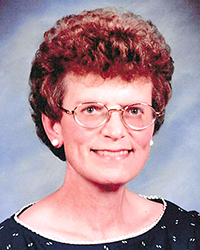 Trudy was born on Oct. 25, 1947, in Albert Lea, Minnesota, to John H. Smith and Arline (Campbell) Smith. She grew up in Albert Lea and graduated from Albert Lea High School in 1966. Trudy attended the University of Minnesota from 1966 to 1968. She entered Naeve Hospital School of Nursing in 1968, graduating in 1971 as a registered nurse. Trudy worked at St. Olaf Hospital in Austin, Minnesota, from 1971 to 1974. During this time, she was diagnosed with multiple sclerosis and retired from nursing for 13 years. During those years, she received treatment for her MS and spent time with her children and their activities.

In 1987, after her MS stabilized, she took a nursing refresher course at Methodist Hospital in Rochester, Minnesota, allowing her to reactivate her RN nursing license in Minnesota. She then returned to work part time as the night supervisor at Good Samaritan Society in Albert Lea for over 15 years and at St. John’s Lutheran Home for a short time in 2001. She retired from nursing in January 2003 to spend more time with her ailing parents and their needs.

She married Gary H. Lerud on Feb. 6, 1971. They lived in Albert Lea until moving to St. Cloud, Minnesota, in June of 2006. Trudy was a Brownie and Girl Scout leader for several years. Together, she and Gary were Cub Scout leaders for two years. She was an active member of the Albert Lea Church of Christ, where she was a Sunday school teacher and member of the Christian Workers ladies group; she served as treasurer and was involved in various group functions. She enjoyed music, movies, and sewing projects as well as spending time with her grandsons.

Funeral services will be held at 11 a.m. on Monday, July 29, 2019, at Bonnerup Funeral Service in Albert Lea with the Rev. Vern Harris officiating. Friends may visit with family from 5-7 p.m. on Sunday, July 28, 2019, at Bonnerup Funeral Service and one hour before the service on Monday at the funeral home. Interment will be at Hillcrest Cemetery.