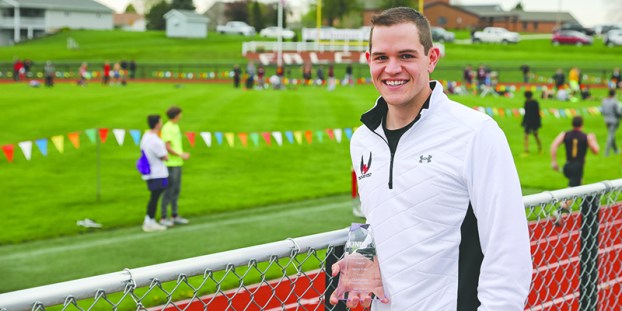 Blooming Prairie grad Aaron Krejci is now an athletic trainer at Aplington-Parkersburg High School in Iowa. Krejci recently received an award as an Outstanding Preceptor from the University of Northern Iowa. Photo Provided

Sticking around sports: Former BP athlete is excelling as an athletic trainer

“It was pretty humbling to win and it was a big honor to have the students vote for me when I’m from a smaller school district and I don’t see as many of them,” Krejci said.

Krecji has worked as a full-time trainer at A-P since the fall of 2016 and he teaches students to train the same way he learned — by letting them get out and work.

“At the beginning it was kind of challenging, because I wanted to do everything,” Krejci said. “But then it gets pretty busy and I needed the help. Now I’ve been kind of throwing them to the wolves and letting them do what they’ve been taught. I’ve gotten better at handling students.”

Krejci is a 2010 BP grad who played football, basketball and baseball for the Awesome Blossoms. He was a lineman on the BP team that went to the Minnesota Class A State Football Quarterfinals in 2010.

Krejci, who is the nephew of Grand Meadow football coach Gary Sloan, former Austin volleyball and softball coach Cindy Owen, and former Hayfield volleyball coach Deb Harvey, has been around sports for much of his life.

Standing on the sidelines as a trainer comes naturally to him.

“Sports and coaching are a big thing in our family,” Krejci said. “(Sloan, Harvey and Owen) were all mentors to me. They all put the kids first more than the sport and that kind of plays a role in my profession. I’m helping out students and putting them first. I don’t worry as much about the game itself.”

Krejci suffered a torn meniscus in his knee during his senior season with the BP football team. It caused him to miss one football game and a season of basketball, but it also strengthened his desire to get into training.

After competing on the field, Krecji is glad to have a job that keeps him near sports.

“I don’t know how someone without a sports background could do this job. You know what they’re going through and you know the demands of the game,” Krejci said. “You can kind of get the vibe on whether or not they’re kind of milking it or if they’re really hurt.”

Krejci doesn’t put on pads or a uniform when he heads out to sporting events anymore, but he still gets a thrill from his job. He embraces the process of helping athletes recover and nothing pleases him more than seeing an athlete work they way back into competing shape.

“You’re the first one that deals with them when they get hurt and then you go the whole journey with them in getting them back,” Krejci said. “That first game back for them is kind of the reward. You get to see them do what they love doing.”

Krejci earned his degree after four years of school at Minnesota State University in Mankato and he finished his schooling at UNI.

Appreciation for the game: Austin’s Biranu is grateful after scoring twice in a big win

Gadisa Biranu has learned a lot about life and a lot about soccer this summer. When he had a shining... read more