Steven Edward Taverna, 25, of Winona was charged with felony check forgery-offer or possess with intent to offer on Friday in Mower County District Court. 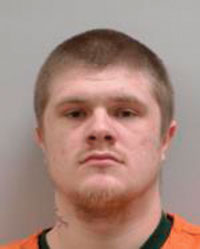 According to the court complaint, an Austin police officer was called on May 20 regarding a check forgery incident at a local bar. An employee at the bar said a male and female came into the bar the previous day to cash checks from “McFarland Truck Lines” in Austin. She checked the woman’s identification and cashed her checks. She also cashed checks for the man (purportedly “Phillip Steffes”) despite him not having any identification.

written the identification card number on the checks. The checks later came back as fake.

The officer had dispatch run the identification card number and was advised that it was not on file. He noticed that all of the checks had the same check number and that the routing number was not associated with any bank.

Surveillance footage from the bar showed both suspects and the vehicle they were driving.

Police returned to the bar later that day after another employee reported that a woman, identified as Danielle Georgia Steffes, was attempting to pass a bad check in the total of $924.62. Officers spoke to Steffes, who said she was trying to pass a check, but not a bad one. She then began to cry and admitted the name on the check, “Natalie Wilkins,” was not her real name. She told police she was “going through a divorce” and needed the money for an attorney. She admitted to cashing bad checks the previous day, sayingshe learned how to forge checks on TV.

Steffes told police she came to Austin the previous day with Taverna and another men and said Taverna was the man who came into the bar and helped her cash the bad checks.

She denied knowing where they were.

Police reviewed surveillance footage from the bar and noticed Taverna had a distinctive tattoo on his left hand and was wearing a gold watch. They then located several

Facebook profiles belonging to Taverna and observed the same tattoo and watch.

A review of Taverna’s criminal history shows prior convictions for theft, drug possession and domestic assault.

Taverna will appear in court again on July 11.

Probationer charged with breaking into residence