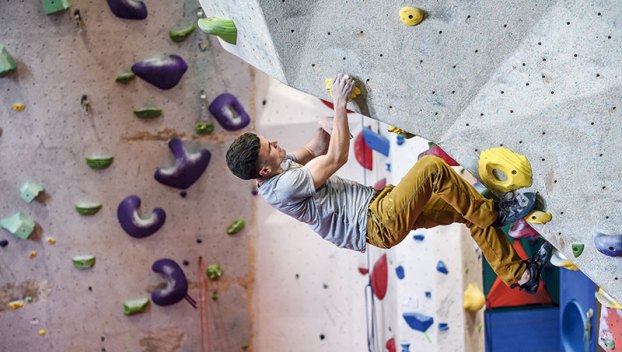 Dakota Biwer looks for the next handhold during a climb at Roca Climbing and Fitness in Rochester. Photos by Eric Johnson/photodesk@austindailyherald.com

Scaling a Challenge: Austin native takes up the sport of rock climbing

Austin native Dakota Biwer isn’t fazed at the thought of dangling from a cliff with nothing more than the support of a thin rope keeping him from falling to oblivion.

He actually cherishes that moment and looks forward to finding it as often as he can.

Biwer, who lives and works in Rochester, took up rock climbing after he visited his cousin Rick Percival in Colorado a few years ago. It took Biwer some time to master the technique of climbing, but after watching a few YouTube videos of experienced climbers, he was able to grasp the concept.

“I kind of fell in love with climbing. As soon as I came back to Minnesota I bought a membership (at Roca Climbing and Fitness in Rochester),” Biwer said. “I bought all of my climbing gear and I started climbing.“ 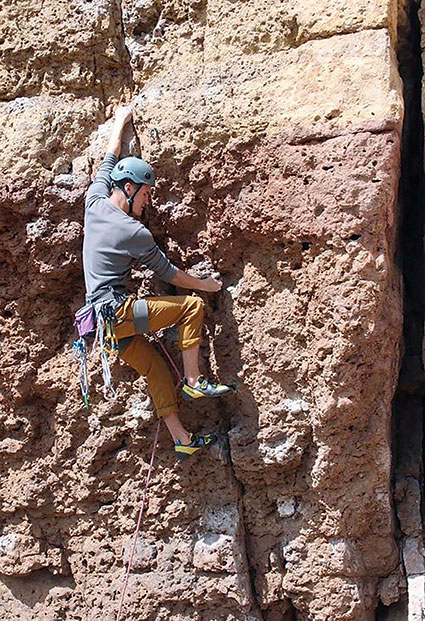 While sharpening his skill sat Roca, Biwer also found some quality climbing locations near Austin at Barn Bluff in Red Wing and Sugar Loaf in Winona. He plans to visit Colorado again in the near future, and he also plans on climbing in Arizona and Wyoming in the near future.

A long the way Biwer of learning the skills of climbing, he’s also learned to practice patience.

“I like do the high stuff, where it might take a half a day to get to the top,” Biwer said. “I just trust myself and I feel like I know what I’m doing. I’m not going to do something that I’m not sure about. It’s always good to go with someone who’s more experienced than you are.” 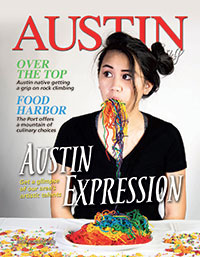 Check out this story and more, including our annual Austin Expression section in the July-August edition of Austin Living, out now.

Biwer has reached heights of 1,000 to 2,000 feet while climbing and he’s learned that the best way to avoid thinking about any distractions. The process is both challenging and rewarding at the same time.

“When I’m climbing I can take my mind off of everything else. It’s just me and my climb. I just have to figure out how to do it and get to the top,” Biwer said. “There are some climbs where I’m like ‘I can’t believe I was able to do that.’ You’ll just have your fingers in the holes and some of them are very tough to do.”

Biwer is eventually hoping to test himself on bigger climbs at places like Yosemite National Park or Devil’s Tower. Those climbs would require him to be on the ascent for multiple days and would require a tremendous amount of focus.

However, Biwer recommends climbing to anyone who has the time and dedication to do it. He’s even sold it to his sister Hannah, who graduated from Austin High School in 2018. Hannah was an multiple sport athlete in high school, but now she’s slowly adjusted to climbing at Roca.

She’s planning to join Biwer on his trip west this summer.

“At first she didn’t like it, because she had to catch up on her upper body strength. But she knows that I love it and now we’re going on a road trip,” Biwer said. “It’s made us closer and we have a common sport that we can do together. We can crush our goals together.”

Roca Climbing and Fitness is located at 6071 Rome Cir NW, Rochester, MN 55901. It offers a place for experienced climbers to come in and practice and it also has classes for those who are getting started in climbing. 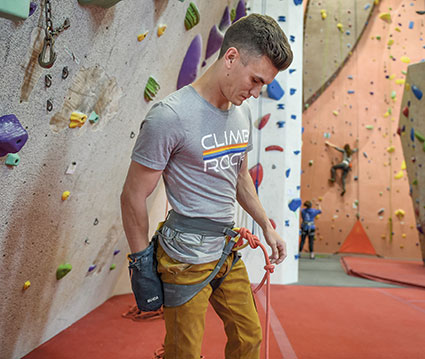 Dakota Biwer readies himself for a climb at at Roca Climbing and Fitness in Rochester.

Hormel Home is a place for music

2019 marks the 10th season of music programming at the Hormel Historic Home. Music was important to the Hormel family... read more