Two well-known musical acts will be combining their talents this season.

The Northwestern Singers and Riverland Community College’s College Choir will be sharing stages for the 2019-20 concert season.

Although the missions of the two groups are different, their overall goal is the same: to make and share great music.

“By combining talent and resources in creative ways, we believe we can provide new experiences for both our performers and our audiences.” said Scott Blankenbaker, director of music at Riverland Community College. “This is a chance for all our students and local residents interested in vocal performance to join us for something very exciting.”

The idea of joining the two groups is a fairly recent development. For the last few months, Blankenbaker has been working with Northwestern Singers about the possibility of joining the two groups, something that has already happened briefly five years ago when the RCC ensemble Frequency worked with the Singers to produce a concert at the Paramount Theatre.

“We started talking about six, seven months ago,” Blankenbaker confirmed.

Blankenbaker will be directing both choirs and was instrumental in bringing forth the idea.

The combining of the RCC and Singers takes a step toward facing the hurdle of voices in terms of numbers. In this way, Blankenbaker is hoping to open up the experiences his students will get, along with bolstering the already talented ranks of the Singers.

“Our numbers in college choir fluctuate from year to year,” Blankenbaker said. “Sometimes it’s a pretty small group and it makes it hard to do some of the more challenging music. This is one way I could give the college people different experiences, a larger choir experience.” 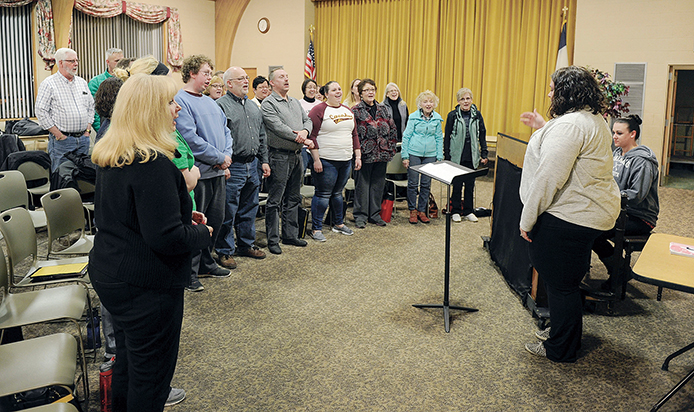 “The Singers were kind of in the same situation, numbers going up and down as well,” he continued. “I’m excited about the possibility of having more people involved.”

Aspects of both groups will remain the same. The Northwestern Singers will rehearse primarily in the evenings and the College Choir will have the bulk of their rehearsals during the day.

However, there will be crossover and several fully combined rehearsals. Fans of the Northwestern Singers have come to expect choreography, and there will still be some movement, but not dance as it has been in the past.

Another difference will be a balance of music performed during concerts. Riverland College Choir concerts have typically been about 90 percent classical art music and 10 percent popular styles, while the Singers have progressively been dipping into more pop-centered pieces. That ratio will shift to a more equal balance of both styles for the coming year.

Serving yet another function for the College Choir, the joining will allow the group to meet another of Blankenbaker’s goals.

“For the last few years I’ve been trying to think of new ways to get our college music students out in the community more,” he said.

Overall, this merger is seen as a positive step forward. Joining forces gives both organizations opportunities to do things that they could not do alone.

The groups hope to demonstrate this in a concert of Broadway classics next April. It will feature favorite choruses of Rodgers and Hammerstein with an orchestra and youth choir(s).

“We really hope to make this a big, enjoyable event for all,” said Faye Bollingberg, president of the Northwestern Singers Board of Directors.

Other performance plans include the Singers’ annual benefit concert in November and a December concert at the Paramount. Both organizations are looking at this as truly a community venture and are hoping even more of the community will join.

The one big question that remains is just how permanent this situation will be.

“I would say it’s probably a test run,” Blankenbaker said. “I could see it and we have talked about the possibility of extending this longer. We’ll see how it goes.”

Interested singers only need to complete a short, simple audition and be available on either Tuesday evenings, for an hour on Monday and Wednesday afternoons, or any combination of those days. The first rehearsal will be Tuesday, Sept. 10 in room E102 in the East Building of Riverland’s Austin campus.

For additional information can be accessed at www.northwesternsingers.com or by contacting Scott Blankenbaker at Riverland Community College at scott.blankenbaker@riverland.edu.