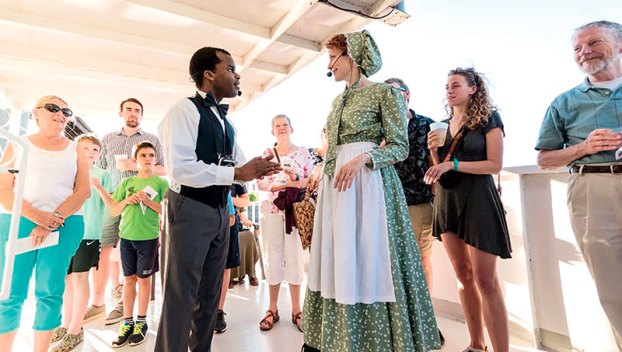 Actors Mahmoud Hakima, left, and Dawn Krosnowski, playing the roles of Gabriel Cooke and Catherine Doyle, act out a scene during a performance of “Murder on the Mississippi: Antebellum,” an interactive period mystery play set in 1856 aboard the riverboat Jonathan Padleford. Tom Baker for MPR News

One of the people aboard the Jonathan Padelford on this summer evening has a secret. He, or she, is planning a murder.

This isn’t an ordinary river cruise. It’s an interactive murder mystery that employs the riverboat to take guests down the Mississippi River to find the killer hiding among them.

“Murder on the Mississippi: Antebellum” is set in the 1850s, just before the Civil War. The production is a collaboration among Mississippi Park Connection, Mississippi National River and Recreation Area and Fearless Comedy Productions.

“One of the things we like to do in partnership with the parks service is to create programs to get people to and on the river,” said Katie Nyberg, executive director of Mississippi Park Connection. “Our community has such a strong affinity for arts and culture that for us, reaching out and partnering with Fearless Comedy Productions was such a great fit.”

This is the production’s third season on the river. Each year, the writers choose a decade in history when the Mississippi River was particularly important to St. Paul.

The first year’s show was based in the 1920s, during Prohibition. Last year, the theme was the 1940s, during World War II. Guests are encouraged to wear period costumes.

The director of the show, Derek “Duck” Washington, said the history of each show’s time period is reflected in the cast of characters.

This year there’s a pair of Irish immigrants, an escaped slave, a railroad baron and a shipping heiress, among others. The heiress, Margaret Vanderbilt, has learned of a potential killer who has boarded her ship and is planning on causing harm to one of her guests.

The show combines scripted acting with improvisation. The actors perform in scenes that take place all over the boat. Guests meander from scene to scene, looking for clues to the murderer’s identity.

In between scenes, audience members can talk with the actors to gather more information. For the actors, there is no backstage. They always have to be in character.

“During this show, you have no idea where people are going to be sitting or standing,” said cast member Angela Fox, who plays a journalist. “There’s been times when we’re supposed to be in a certain area, but there are a bunch of chairs there. Sometimes people walk through scenes. It’s unlike any other theater that I think I’ve ever done.”

At the end of the show, audience members can submit their guess of who they think is the murderer. They learn the answer before disembarking.

Three performances remain this summer: this Wednesday and Aug. 22 and Sept. 18.

Marvel’s next films will bring diversity, onscreen and off