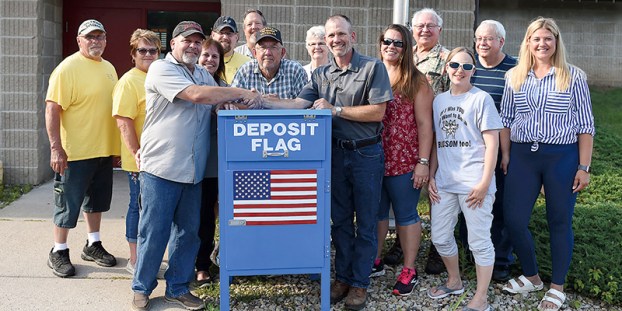 If you’re a military veteran, then you know that the River Rats Car Club is more than just a club. They are a partner.

Recently, the club donated a drop-off bin for people who want to retire American flags, making it easier to get the flags in the hands of those who know how to retire them properly.

Douglas Miner, president of the Blooming Prairie Serviceman’s Club was on hand with other officials from the club, along with representatives of the River Rats, to officially receive the bin.

“This is a big deal,” Miner said. “Flags need to be disposed of properly. It’s so simple, but the magnitude is huge.” 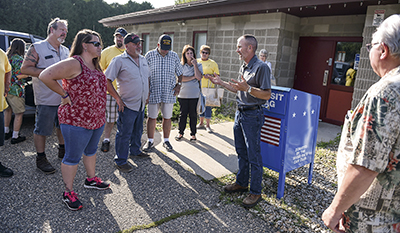 Douglas Miner, president of the Blooming Prairie Serviceman’s Club thanks members of the River Rats Car Club for the donation of the flag drop-off bin in front of the club Thursday evening. Eric Johnson/photodesk@austindailyherald.com

This box joins three others — two in Austin at the legion and VFW and the third in Adams.

Much like you can drop off a letter in a mailbox, people can literally drive up to this box, right off the main entrance to the club.

The shape of the box is similar to that of a postal mailbox, which was the group’s first choice, but getting old boxes from the Post Office turned out to be impossible.

Instead, they simply constructed their own.

The idea of the drop off came from a friend of a River Rats member who had seen the same idea in the southern United States.

“A friend was driving through the south and saw it by a legion,” said River Rats club member Stan Iverson.

The partnership between the club and veterans has always made sense for club members.

“They’ve done plenty for us so what can we do for them?” said John DeVries, club member.

For those who are on the receiving end of the drop-off boxes, the gratitude can never be enough.

“We’re grateful for the River Rats,” Miner said. “Words don’t give it justice.”

US to send asylum seekers back to dangerous part of Mexico

HOUSTON — The U.S. government on Friday expanded its policy requiring asylum seekers to wait outside the country to one... read more