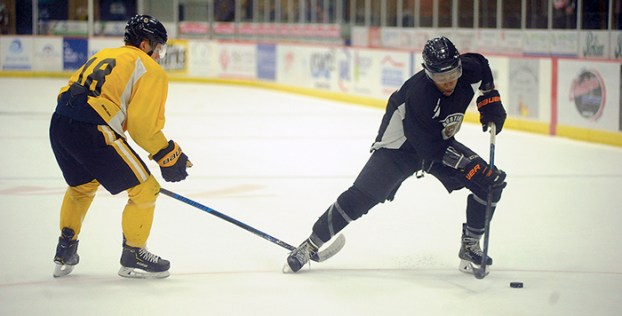 Dante Sheriff, right, reaches out and grabs the puck for the Austin Bruins during the team’s All-Star game in Riverside Arena Friday. Rocky Hulne/sports@austindailyherald.com

The Austin Bruins took care of one of their last offseason routines in preparation for their 10th season in Riverside Arena Friday night.

The Bruins closed out their team camp with an intersquad All-Star game that Team Black won 6-4 over Team Gold. The week left the Austin coaching staff with some tough choices on which players to keep.

“I was pretty impressed by the group that we brought in,” Austin head coach Steve Howard said. “There’s a lot of good free agents and it’s definitely going to make it tough on us in September.” 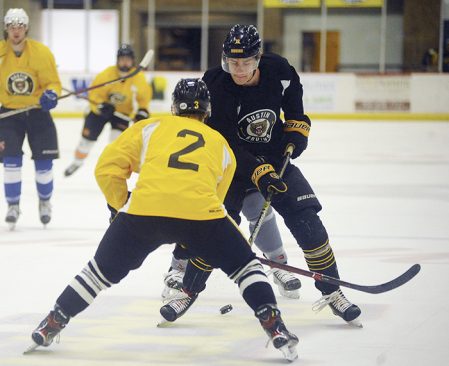 Hugh Larkin advances the puck for the Austin Bruins in the team’s All-Star game, which wrapped up the main team camp in Riverside Arena Friday. Rocky Hulne/sports@austindailyherald.com

Thirteen players on their 30-man list are currently on USHL rosters, which means the team had to go looking for players who can fill those roles.

“It left a big door open for a lot of free agents to come in and win some jobs,” Howard said. “This is only the start, they’ve go to come in here in September and show us what they can do.”

Howard, who is in his third year as head coach, said the Bruins had about six USHL players in his first two years, but this year the team had a lot more talent lined up over the summer.

“We went after some good talent and our scouts did a great job of finding some talent,” Howard said. “We were able to go after some of those big names and if we get five or six of those guys to slip down, then we’re great, but if not, I’m pretty happy with the free agents that we got going forward. Hopefully we can come out of the gates hot again.”

The Bruins lost the bulk of their scorers from last season and it’s likely the team will have to rebuild at the goalie position. 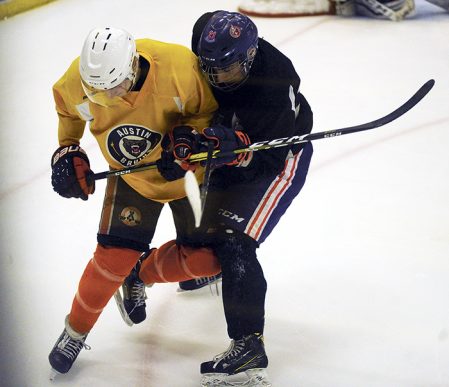 The Austin Bruins have been battling ot make the roster all week long and the team capped of its main camp with an All-Star game in Riverside Arena Friday. Rocky Hulne/sports@austindailyherald.com

Austin had approximately 150 players compete in their camp this week and those skating on Friday were the last players remaining before the team begins to trim down its roster before the regular season.

The players who were still competing for spots on Friday finished the week by playing seven full games.

Austin was knocked off by eventual NAHL champion Aberdeen in the NAHL Central Division playoffs last season and the Bruins will likely have a lot of different names to learn when the team opens its season in the Blaine Showcase on Sept. 18.

Austin will host Aberdeen in its home opener on Oct. 4.

On Saturday, it will have been 50 years since the United States landed human beings on the moon’s surface. Apollo... read more