Paying ‘until I die’: Rochester teacher sees no end to student loan bills

Editor’s note: Minnesotans who attend college have some of the highest student loan debt in the country. This story is part of an occasional series about individuals whose lives have been altered by their student debt. Share your story with MPR News at this link.

Jean Prokott won’t complain about her student loan debt; she’s made peace with it.

“I just sort of accepted that I will give the government $500 a month until I die,” she said. “I don’t ever see how I would catch up on these loans.”

Prokott likes her job as a teacher at Century High School in Rochester, Minn. With a decade’s experience teaching and two master’s degrees, she makes about $70,000 annually. Her current income-based student loan payments are $400 to $500 every month.

Her loans totaled $84,000 after graduate school eight years ago. Today, interest has ballooned Prokott’s loan debt to about $96,000.

Most teachers worry about their loan debt because of the profession’s high education requirements and relatively low pay, according to a 2017 NPR survey.

After graduating from St. Michael-Albertville High School in 2000, Prokott said it was an “automatic decision” to attend college. She loved school. 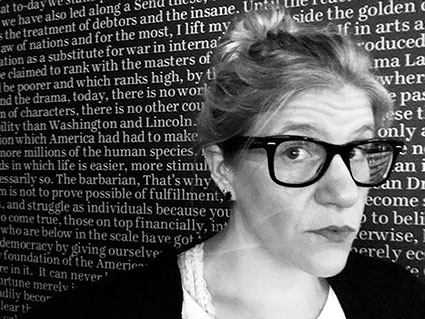 Jean Prokott makes a reliable wage as a public school teacher, but the loans are still a constant burden.
Courtesy of Jean Prokott

But as a first-generation college student, she said, Prokott couldn’t rely on her parents for advice. Her high school wasn’t much help, either, she added.

“God bless St. Michael, but the counselors were not very helpful in terms of teaching about scholarships for any opportunities other than really just sending in the application,” she said. “And I didn’t really know how to navigate any of that online.”

She wound up enrolling at Winona State University, taking out loans to pay for most of her education and holding down jobs as she attended school. She graduated in 2004 with an English degree and about $11,000 in debt.

Next step: a graduate program in creative writing at Minnesota State University Mankato. She was granted a teaching assistantship in the program, which covered most of her tuition. She took out loans for living expenses she couldn’t cover with additional part-time work.

Prokkott said Mankato’s three-year program added another $24,000 to her debt load. She finished in 2007 and struggled to find work amid the nationwide economic recession.

“It took a while to find a job,” she said. “I had to be on unemployment for a while.”

A Mankato spokesperson said the school offers support and guidance, including loan counseling after leaving school, to help students “make fiscally responsible decisions regarding their education.”

Prokott got an internship with Graywolf Press after graduating from Mankato. But full-time, paid work was still tough to come by, even with a master’s degree.

“It’s was a really tough time. And then you start to feel guilty as well. There’s all this pressure,” she said. “Like, ‘Why did you major in English? You deserve this happening to you. You should have thought about this long-term.’ So there’s also that emotional burden in terms of following what you love to do which is quite upsetting.”

She said her frustration with finding a job led her to enroll in graduate school again, this time at Winona State where she pursued a teaching degree. She found a program where she took two summers of classes plus a year of teaching while also taking classes.

The hours were brutal and added to her debt burden, Prokott said, but it was worth it.

“Teaching is a very clear, marketable profession,” she said. “You know what you’re going to get to, you know what job you’re getting into. And so it was really helpful to have such a clear goal and particular job.”

She earned her teacher’s license in 2009 and went back to finish the final credits for the master’s degree in 2011.

Prokott worked teaching jobs at Hutchinson and Wayzata schools between 2009 and 2013 before arriving at Century High.

However, Prokott said she’s likely at her peak salary, earning $70,000 a year.

While she’s doing OK financially, she said, she’s bitter about her debt levels. She said she believes the government should do more to help people who work in a public service field like education.

“I mean if it was up to me,” she said, laughing, “I’d rather burn $400 and just watch the money burn than give it to the government.”

ST. PAUL — The Minnesota Supreme Court will decide whether the state Department of Natural Resources has the authority to... read more