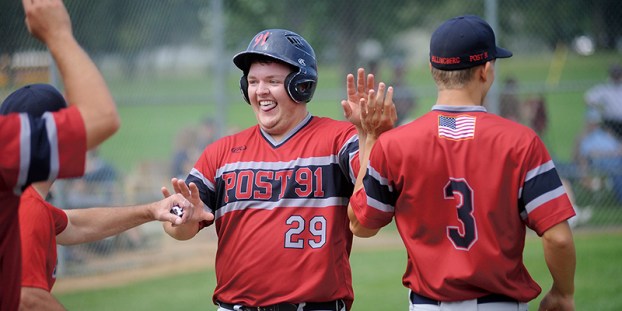 Micahel O’Connor is greeted at home plate after scoring on a Rochester Patriots’ throwing error. O’Connor had doubled to score two runs and he had to hustle the base paths to get home. Rocky Hulne/spors@austindailyherald.com

O’Connor’s field day: Post 91 moves to within one win of state

ROCHESTER – It was a day of strange, but pleasant circumstances for Michael O’Connor and the Austin Post 91 Legion baseball team in the Sub-State Semifinals at John Adams Middle School Friday.

O’Connor notched a win and a save in the same game, he ran the bases and Post 91 won a ‘home game’ in the Rochester Patriots’ home field with a 19-9 six inning victory.

O’Connor pitched two scoreless innings to start the game, but he was moved to the outfield when Austin jumped out to a 10-0 lead. He was brought back in to close the door after the Patriots pulled to within 11-9 in the fifth inning.

O’Connor allowed just two base-runners and he struck out three in two and and a third innings and he also knocked in two runs with a double during Austin’s 10-run second inning. After slipping on third base, O’Connor was able to score on that hit, due to a Rochester throwing error.

“It was a unique day,” O’Connor said. I felt going into the game and I was ready to go,” I was pumped to get back on the mound (in the sixth). I wanted to go back in and help my team.”

While the Patriots chipped their way back into the game, Austin had a big answer when it posted eight runs in the bottom of the sixth. AJ Mueller blasted a three-run homer that traveled well over 330 feet during that surge and he capped it off with a bat flip that went nearly 15 feet in the air in front of the Post 91 bench.

“The game was a complete emotional roller coaster and we were giving them everything,” Mueller said. “It felt good to nearly seal the deal (with the homer).” 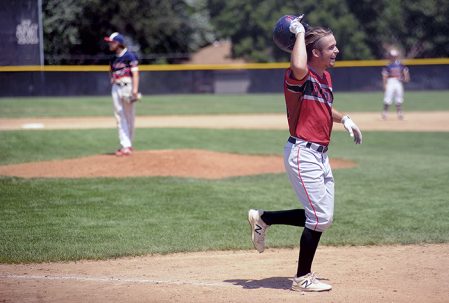 AJ Mueller trots home after hitting a three-run homer for Post 91 in a win over the Rochester Patriots in the Sub-State semifinals Friday. Rocky Hulne/sports@austindailyherald.com

Austin is now taking aim for the State Legion Tournament. It can advance with another win over the Patriots in Rochester at 1 p.m. Saturday. If Post 91 loses that game, it will get another chance.

“This is something we’ve been talking about since we were freshmen,” O’Connor said. “We’ll all be ready to go on Saturday.”

The kids love it: Wiffle ball taking summers in Hayfield by storm

HAYFIELD — When Kasey Krekling and his friends started playing wiffle ball on a daily basis the summer after his... read more