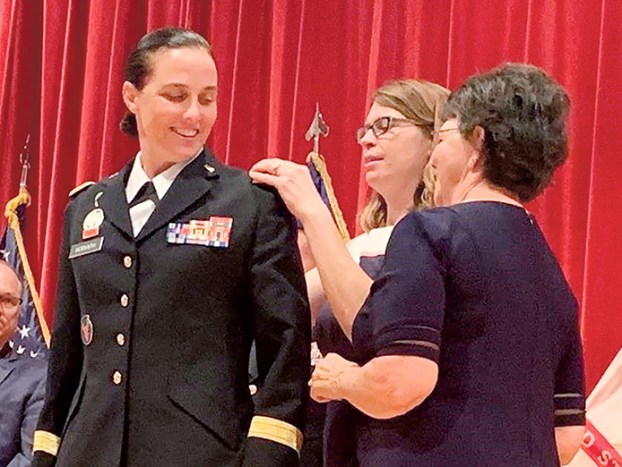 Stefanie Horvath's wife Christy and mother Catherine pin the insignia of her new rank on her shoulders as she was promoted to brigadier general at a ceremony in Rosemount on Tuesday. Brian Bakst | MPR News

Stefanie Horvath was promoted Tuesday from colonel to Minnesota National Guard brigadier general in a ceremony in Rosemount. Her wife, Christy, and her mother stood on stage with Horvath while pinning the insignia of her new rank on her shoulders in front of the governor, fellow Guard leaders and other invited guests.

Horvath, a decorated officer, is the Guard’s first openly lesbian general. A 30-year veteran of the armed forces, she is married with two daughters and lives in Eagan.

“The path to this moment was not a path of perfection,” Horvath said. “But it was really a path of persistence, resilience fostered by this organization that has provided opportunities and acceptance.”

Horvath recounted days of agony when she decided to disclose her orientation after much of her tenure was covered by the “don’t ask, don’t tell” policy. It was when her now-wife was dealing with a serious injury that Horvath needed to help tend to over a period of months. The two met playing rugby.

Horvath said her boss calmly replied, “Do what you need to do.”

In an interview after the ceremony, she expressed her appreciation.

In her remarks on stage, she repeatedly spoke of finding acceptance from her Guard colleagues and superiors.

Horvath joined the National Guard in North Dakota in 1989, but moved to Minnesota so she could “be the person she was in the Twin Cities,” according to a telling of her relocation by Maj. Gen. Jon Jensen.

Jensen, the Minnesota Guard’s adjutant general, praised her as an officer who has “earned the trust, the admiration and the confidence” of her Guard units and higher-ups.

He said Horvath proved her mettle by helping steer the 34th Infantry Division’s presence in Basra, Iraq, a decade ago.

She was awarded a Bronze Star for service in Iraq. She has also done a deployment to Kosovo.

Gov. Tim Walz, a Guard veteran himself, called it a “day of celebration, a day to recognize what we have.”

Horvath said she doesn’t plan to stay silent in her new role, which centers on bolstering cybersecurity in the Guard and for the state. In her full-time role, she works for the state technology agency.

“I will also speak for our crucial importance of diversity and inclusion, not for obligation but for purposely improving our problem solving,” she said. “Improving our problem-solving will increase our sustainability, our survivability and our effectiveness as an organization.”

Horvath is one of three female generals in the Minnesota National Guard, out of a total of seven. She paid tribute to those who led the way.

Asked if she, too, feels like a trailblazer, Horvath paused. She said she would rather be an example for women who want to excel at cyber-related roles in the military and elsewhere.

“I would love to continue to blaze a trail for women to get into those fields,” she said.

Most attackers made threats before incident, report finds

WASHINGTON — One-third of the attackers who terrorized schools, houses of worship or businesses nationwide last year had a history... read more