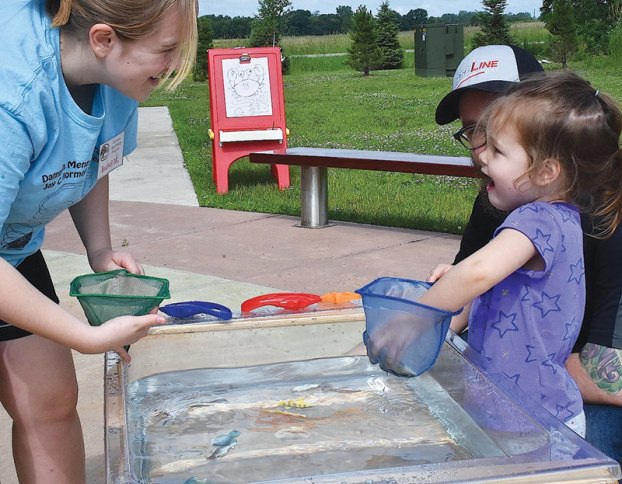 Lorelei Gerhart, 2, grins at mentee Isabel Mattick when picking out some toy fish she scooped out of a “lake” at the Jay C. Hormel Nature Center during a Summer Adventure class. Deb Nicklay/newsroom@austindailyherald.com

Mentorship program has provided nature experiences to scores of youngsters

When Isabel Mattick, 17, helped little Lorelei Gerhart identify some tiny play fish during a summer program at the Jay C. Hormel Nature Center last week, there is a good chance neither one thought much about how it was that Isabel came to meet Lorelei.

The fact is, though, that without Isabel and many like her – mentees, that is, who are part of the Kevin Dammen Memorial Mentorship Program offered at the center —  the Summer Adventure class that Lorelei, 2, was enjoying might not be available at all.

Mentees who work at the center are instrumental in providing help on the play days as well as during the Summer Adventure Classes and other events. Those summer classes drew over 2,600 kids in 2017, said Julie Champlin, the center’s office manager. The interest in summer programming continues to grow.

“But we just couldn’t do it without them, or offer the variety of classes that we do,” she said.

The mentorship program was established in 2012 and named for Kevin Dammen, an active and giving young adult who loved the center and its mission. Dammen died in a kayaking accident in 2011.

In 2009, Kevin and his brother, Kyle, established an annual cross country ski race at the center, returning all proceeds to the nature center.

That winter race served as the fertile ground from which the Dammen Adventure Race – whose second annual race will be July 13 (see related story) – has grown. The center created the summer event since the winter cross country race was a hit-and-miss proposition due to poor weather or lack of snow, said Champlin.

Over 40 participated last year in the summer race. Proceeds from the adventure race are used, in part, to fund the mentorship program.

And, it has been successful. Just ask Adrianna Meiergerd, 18. She knows that while the mentorship program supports the center, the program’s big aim is to support the mentees who learn work skills while working in their favorite environment – the outdoors. 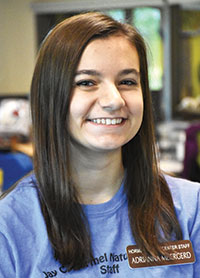 Meiergerd served as a mentee for three years until this summer, when she was hired as a summer administrative assistant. Her first year as a mentee followed her family’s move to Austin from Nebraska. She found she enjoyed the experience.

Champlin said she has watched Meiergerd gain confidence and hone public relation skills over her time as mentee. Those skills will do her well in the future, she added.

“It (mentorship program) has given me such great opportunities,” Meiergerd agreed. She will head to the University of Nebraska at Lincoln to study agriculture business and finance.

“And it’s super fun,” she added. She has enjoyed the variety of experiences, from working the ski rental in the winter and teaching someone how to paddle a canoe, to tagging monarch butterflies and making loon hats for the younger set. Champlin noted that mentees were instrumental in helping a woman who was injured after she fell on a trail, and followed the right protocol in alerting emergency personnel.

Grace Anderson, 13, is in her first year as a mentee and one of 26 who are on the mentorship roster this year. On this day, she is supporting instructor Julie Hecimovich with a toddler Summer Adventure that’s all about water. She helps the kids color underwater creatures, look through a mini microscope – even try a bit of tinned fish, such as kippers (few kids wanted to taste that).

She applauds the program’s benefits. 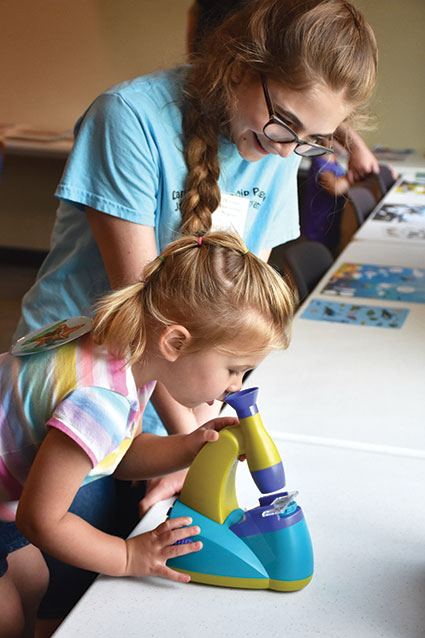 Grace Anderson, 13, a mentee with the Kevin Dammen Memorial Mentorship Program, helps Willow Cambern, 2, of Lyle, with being able to see “what’s in the water” through a microscope. Anderson is a first-year mentee who helps with the Jay C. Hormel Nature Center’s Summer Adventure and Nature Play Days, as well as other events, during the summer. Deb Nicklay/newsroom@austindailyherald.com

“I’m learning a lot of new things about nature,” she said. The only negative thing she could think of was having to hold a snake during one class, she said, making a face and laughing. “But I did it.”

Isabel – the mentee who was helping Lorelei Gerhart identify fish — has been a mentee for two years and hopes to work in wildlife management some day.

Unlike Grace, Isabel joined the mentee ranks when a friend told her about the program. She found she enjoyed both the classroom work with kids and even more with the animals housed at the center

“And I’ve always loved snakes,” she added with a grin.

Team up for the Dammen Adventure Race; Supports mentorship at Nature Center