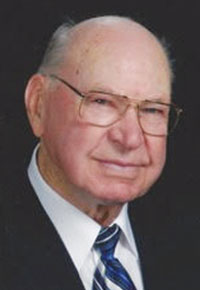 Leonard John Buelt, youngest of nine children of Herman and Elizabeth (Behrens) Buelt of Halbur, Iowa, was born on April 14, 1924, on the family farm. He attended St. Augustine’s grade school in Halbur and graduated from Carroll High School in Carroll, Iowa, where he was a member of the football team all four years, in 1942. Leonard attended Creighton University in Omaha, Nebraska, but left college after his junior year to run the family farm for his aging father after his brother was drafted into the U.S. Army. Leonard’s brother returned to the farm after recovering from wounds received in Germany and Leonard enlisted in the Army, where he was assigned to the Office of the Inspector General, Headquarters and Headquarters Company, Third Armored Division at Fort Knox, Kentucky.  During a leave, Leonard met a girl from a neighboring town and, after his discharge, married Virginia Beckman on Oct. 3, 1950, in Arcadia, Iowa. He and Virginia lived on a farm south of Carroll for seven years, then moved to a farm near Waltham in 1958, where they raised five children and resided until 2008. In 2008, the couple moved to Austin, Minnesota, and later to Prairie Meadows in Kasson. Leonard was a member of Sacred Heart Catholic Church in Hayfield, Minnesota, where he sang in the choir. He was a member of the American Foreign Exchange Student program, Knights of Columbus, and the Lions Club. Leonard enjoyed farming, raising Black Angus cattle, and watching football and baseball. Leonard received an award for Outstanding Young Farmer in Conservation from the Izaak Walton League. In 1962, Leonard became postmaster of Waltham. He retired from the Brownsdale, Minnesota, Post Office in 1990.Leonard and Virginia loved to travel and visited their son, Steven, multiple times while he was in the Army and based in Europe. While in Germany, they also visited with Sybile Freudenburg, the foreign exchange student they hosted during the 1978-79 school year.

A funeral Mass will be at 10:30 a.m. Thursday, July 18, 2019, at Sacred Heart Catholic Church, 150 Second St. NE in Hayfield with Father Peter Schuster celebrating.  Visitation will be 5-7 p.m. on Wednesday, July 17, 2019, at Czaplewski Family Funeral Home, 501 Second St. NW in Hayfield and one hour before the service on Thursday at the church. Interment will be in Fairview Cemetery with military honors by the Hayfield American Legion Rothie Post 330. To share a special memory or condolence please visit www.czaplewskifuneralhomes.com.