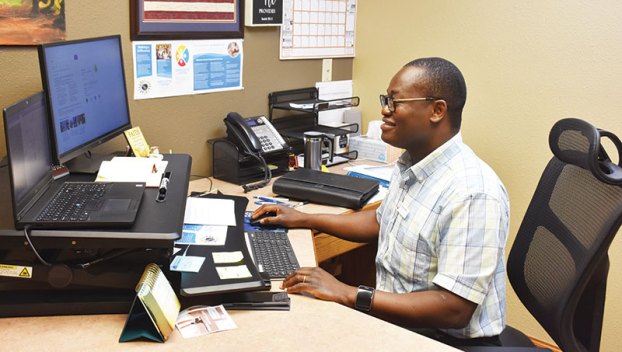 Immigrants to Austin will be greeted by a new face at the Welcome Center. 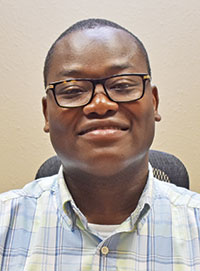 Hailing from Benin, a small French-speaking country in West Africa, Idjidina came to the United States on Sept. 10, 2014.

“I was looking for an opportunity for my family to have a better education and a better life; to discover a new culture, a new language and have a life they would never have back home,” he said. “I can never forget that day because it is the birthday of my first boy.”

As an immigrant, Idjidina is familiar with the difficulties associated with moving to a different country. After being selected at random for a visa through the lottery visa program, which allows migrants to come to the country on a more permanent basis and apply for citizenship after a five-year period, he opted to go to Boston.

“I chose to go to Boston by ignorance,” he said. “I didn’t know anybody there, but I chose Boston because I have my big brother living in Quebec, Canada. I was thinking it is just a four-hour drive to Quebec. But to move from a small country and thinking I can start in Boston, it was a crazy idea.”

Idjidina moved with his wife and three children and stayed with a man who was a friend of his cousin. But within a week, it became clear the arrangement was too challenging, prompting him to move his family into a hotel.

“The biggest challenge I had at that time was the lack of help,” he recalled. “I was alone in a country whose language I didn’t know how to speak and the accent of Boston was difficult for me to get. I didn’t have any information. I didn’t know that I needed to have a Social Security number before I could rent a house or apply for a job. In Benin, if you want to rent a house, you talk to the owner and make arrangements. When you move to the United States under that program, they don’t give you a Social Security number at the airport. You have to apply, and in a big city like (Boston) the demand is too high and I could not get my Social Security number in a timely fashion.”

But Idjidina found his way to Austin in what he called “a miracle.”

“I was in Boston for about one month and was running out of my savings, but fortunately I got in contact with my wife’s nephew,” he said. “He was living in Austin and working for Hormel. He told us, ‘You cannot start in a big city like that. Move to Austin, I am going to help you.’”

From there, his wife’s nephew helped them get an apartment and go to the Adult Learning Center to learn English. It was there that he started meeting people in the community.

“My life in the United States really started in Austin,” Idjidina said.

He first heard about the Welcome Center when he saw they had an open position for a social service coordinator to help the West African community.

He later became the community engagement director before taking the executive director position.

Though he has adjusted to the culture shock, he said the differences between the United States and Benin are “like night and day.”

“There is the level of development,” he said. “Austin is a very small city, but is more developed than the capital of my country. I’m talking about infrastructure; we don’t have the quality of roads you have. We don’t have exits and interchange roads. Another difference is health care. We don’t have a very strong health system like Mayo Clinic. When you go to a hospital back home, if you were sick before going there, you get sicker.”

He also pointed out the differences in education.

“I got to work as a paraprofessional at Ellis Middle School and I had the opportunity to compare the quality of education,” he said. “The way our system works back home, it is a big difference and you realize the education system here focuses on what the student will become tomorrow, not just dump knowledge on them. They learn useful things.”

But the biggest struggle for him, as well as many migrants, was the language barrier.

“I still struggle with English, but I am improving day after day,” he said. “This is why many people from (the West African) community tend to stay in that community. They have that barrier and for me to have the opportunity to be in that position (to help) today, that will send a message that it is possible, so don’t give up.”

But despite the changes, Idjidina is grateful.

“In Austin, I did not lack anything,” he said. “My dream was always to serve in a non-profit organization. I worked for 14 years in a bank back in Africa. I went through the steps and became the financial director, but I felt like my life was not fulfilled because I wanted to directly impact people’s lives. In the United States, I have that opportunity.”

He added that while he was at a July 4 celebration on Thursday, he was asked what the Fourth of July meant to him.

“I said that it means a lot for me to be in a free country where you can express yourself freely, where you can feel secure and feel free to complete yourself,” he said. “When I think about all of the challenges I went through, I feel very grateful. I feel like I was born in Austin and that’s why I love Austin.”

On the eve of July Fourth Democratic presidential hopeful Beto O’Rourke called for positive changes that honor the sacrifice for... read more