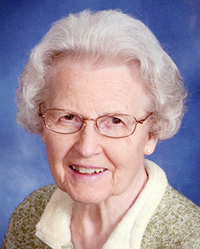 Hazel was born on Aug. 26, 1931, on a family farm in rural Northfield, Minnesota, to Vera (Messner) and Louis VonWald. She attended rural school through eighth grade and then attended Northfield High School. On Oct. 21, 1950, she was united in marriage to Martin S. Benson. Together they raised four children. Hazel was a stay-at-home mother and very busy homemaker until all the children finished high school. She was a great cook and baker and made the very best buns. Once her children were grown, she worked as a nanny and then for years as a housekeeper for the Cannon Falls Community Hospital, retiring at age 72. Hazel and Martin loved to travel; two of her favorite places were Hawaii and Branson, Missouri. Her faith saw her through the loss of Martin on July 5, 2004, after 53 years of marriage. Always a very loving person, her family was very important to her, and this was extended to her parents, aunts, uncles, and many cousins.

A funeral service will be held at 11 a.m. on Saturday, July 13, 2019, at First English Lutheran Church in Cannon Falls, Minnesota. Visitation will be held from 4-7 p.m. on Friday, July 12, 2019, at Lundberg Funeral Home in Cannon Falls and will continue for one hour before the service on Saturday at the church. Active pallbearers will be her nine grandchildren, and honorary pallbearers will be her 11 great-grandchildren. Inurnment will be held at 11 a.m. on Sunday, July 21, 2019, at the Cannon Falls Cemetery. Memorials are preferred to First English Lutheran Church or to Parkinson’s disease research. Arrangements are by Lundberg Funeral Home of Cannon Falls. Online condolences may be directed to www.LundbergFuneral.com.