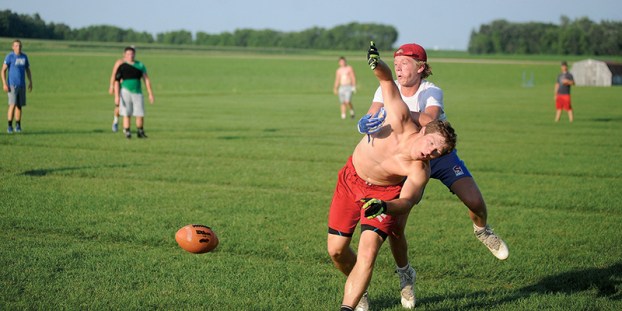 Southland’s Eli Wolff, top, and Nick Boe get tangled up on a passing play during a team scrimmage in Adams Tuesday. Rocky Hulne/sports@austindailyherald.com

Elevating a game: Rebels are aiming to take the nine man world by storm

ADAMS — The sun was hanging low and cows were settling down for the night in a nearby field, but the Southland Rebels football team weren’t done yet.

The Rebels had just finished up an hour-long weight lifting session and an hour-long pads free scrimmage when the music started blaring and players began to line up for some more routes at the practice field Tuesday.

Southland, which is coming off a 5-5 season at the Class A level, is learning how to play nine-man football this summer and the Rebels are embracing it every step of the way. 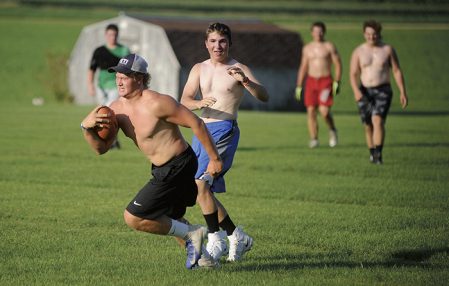 “It’s a blast. We get a lot of laughs out of it and we all have fun,” Brady Popenhagen said of the team’s workouts. “It really hasn’t been too different. We’re working hard in the weight room, we’re doing routes and we’re making sure everybody’s here building up the team.”

Southland started preparing for this season almost immediately after its season ended in a 56-0 loss to Blooming Prairie in last year’s Section 1A semifinals. The Rebels attended the Section 1 nine-man title game between Houston and Spring Grove and they’ve been watching as much nine-man film as they can.

“After last season ended, we immediately wanted to put in a lot more work,” Southland senior Carter Schmitz said. “We saw what a little bit of extra work can do for us. Now we’ve put in a whole lot more work and hopefully it pays off for us.” 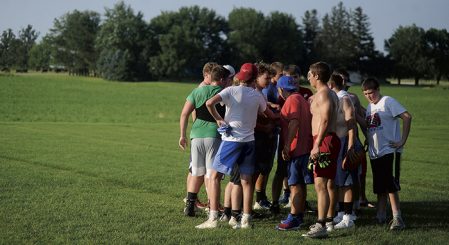 The Southland football team is making the transition from 11-man to nine-man this fall and the Rebels have been busy preparing for that change this summer. Rocky Hulne/sports@austindailyherald.com

Southland head coach Shawn Kennedy knew just who to turn to for some advice on nine man football — a couple of old friends.

Kennedy took his team to nine-man football camp in South Dakota this past June where he was able to speak with his long-time friend Byron Pudwill, who coached Bon Homme to a South Dakota nine-man state title last fall and Dakota Wesleyan head football coach Ross Cimpl, who was Kennedy’s water boy when Kennedy was coaching in Wagner, South Dakota.

“I’ve got some really good friends that are coaches and I went out there to talk to them in June,” Kennedy said. “Coach Pudwell is so knowledgeable about so many things. You just shut up, listen and pick his brain.”

The Rebels brought 22 of their 24 players to that camp in June and they’ve had players working on their own at the practice field three nights per week this summer. The group is self-driven and motivated to change Southland’s fortunes as the Rebels haven’t put up a winning football season since they went 8-3 in 2011.

“The’ve recommitted themselves as a group and they’ve put their teammates above themselves,” Kennedy said. “I don’t have to say squat and they take the initiative. They’re just a great group of kids and they’re very selfless. They’re fun.”

Eli Wolff carries the ball for Southland in a team scrimmage in Adams Tuesday. Rocky Hulne/sports@austindailyherald.com

Southland was able to field nearly 60 players on its roster within the past decade, but numbers have declined as school enrollment has dropped.

While smaller numbers will give the Rebels less depth on the field, it has brought the team closer together.

“It makes us really close as a team and as a whole school. We’re really close,” Schmitz said. “There is a tight bond between us.”

The Rebels will open their season at Houston at 7 p.m. on Aug. 30. Southland will host Mabel-Canton in its home opener at 7 p.m. on Sept. 6. 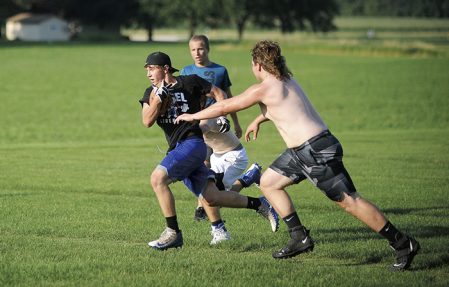 Brendan Kennedy carries the ball for the Southland football team in a team scrimmage in Adams Tuesday. Rocky Hulne/sports@austindailyherald.com

SAINT PAUL – The Minnesota State Arts Board has awarded an Operating Support grant totaling $43,553 to the Historic Paramount... read more