Burton A. Kittelson, 97, of Austin, Minnesota, passed away peacefully Wednesday, July 17, 2019, at home with his wife by his side. 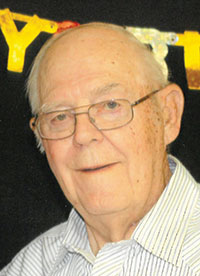 Burton was born July 1, 1922, in Austin to Edward F. and Berthena O. (Stemson) Kittelson. He was baptized at St. Olaf Lutheran Church in Austin. He graduated from Austin High School in 1940. On Sept. 7, 1947, he married Dorothy E. Helleck at Red Oak Grove Lutheran Church in Austin, where he was also confirmed. Burt liked farming. He raised pigs, cattle, corn and soybeans. His dad bought their first tractor in 1937. They sold the horses in 1950, then sold the dairy herd in 1954. Burt was also a patriotic man. During World War II, he went to Fort Snelling to enlist in the United States Air Force with two neighbor friends. They passed their physical but he did not. The physical showed he needed surgery; after surgery, he laid flat in bed for two weeks. He could barely stand or walk, but being young he healed fast. His brother was already in the service, so Burt was the only one to farm with his dad. He put in the crop, then went to enlist again. His dad found out his plan and got to the draft board in Albert Lea, Minnesota, before him and got him deferred. He always felt bad he couldn’t do his part, but was willing to help his dad, who could no longer farm. One month in the 40s he had the largest cream check from the Red Oak Grove Creamery. He worked hard to be a good farmer and to provide for his family. Burt had many farm accidents in his lifetime, not all death defying, but some were close. Early in the summer of ’55 he got caught in the power takeoff on the Minneapolis Moline Tractor. Both legs were broken. In the fall, he drove the corn picker and picked all the ear corn while still on crutches. The hand clutch saved him. At the age of 92, while dumping trash in a hole in the woods with his tractor and loader, it went down into a dug hole. He slid off the tractor seat and was pinned under the tractor for about three hours. His angels saved him as he walked away with only a few scratches. During all the years of farming, he enjoyed fishing and traveling across the country over 30 times to visit his daughter’s families.

Funeral services will be held at 11 a.m. on Friday, July 26, 2019, at Red Oak Grove Church in rural Austin with Pastor Mike Walerius officiating. Visitation will be held 4-7 p.m. on Thursday, July 25, 2019, at the Worlein Funeral Home in Austin and will continue one hour prior to the service on Friday at the church. Interment will follow the service at Red Oak Grove Cemetery. The family prefers memorials to donor’s choice. Worlein Funeral Home of Austin is in charge of arrangements. Condolences may be expressed to the family online at www.worlein.com.