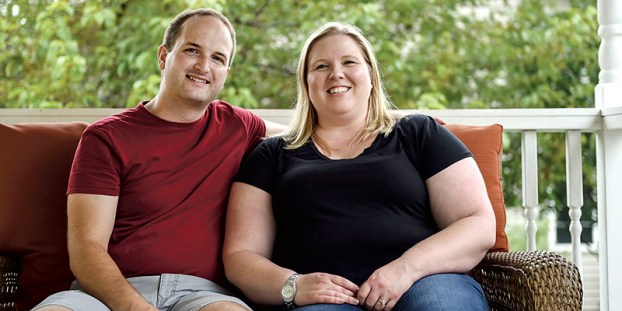 Tyler and Jen Everson are working through the non-profit Both Hands to raise funds for child adoption. At the same time, through the same group, they are helping Suzie Vagt with a service project to clean her yard. Eric Johnson/photodesk@austindailyherald.com

‘Both Hands In’: Eversons fundraise for adoption by helping others

When Tyler and Jen Everson of Austin got married six years ago, both wanted to start a family of their own. The two had talked about raising children and making memories together.

However, some unexpected news changed the trajectory of their journey and the way they thought about family.

“We kind of ended up learning that wasn’t going to be in the cards to have kids of our own,” Jen said. “We were sort of feeling and going through the emotions. It just changed that idea in your head of what your family was gonna look like. We started seeing a lot of signs pointing us toward the path of adoption, and we really considered it a way to have a family that we’ve always wanted.” 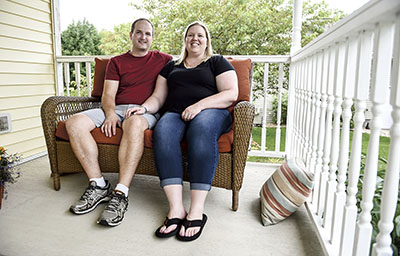 Tyler and Jen Everson are working through the non-profit Both Hands to raise funds for child adoption. At the same time, through the same group, they are helping Suzie Vagt with a service project to clean her yard. Eric Johnson/photodesk@austindailyherald.com

The two seriously discussed adoption for the last two years and decided that this would be the right process for them to have children of their own. They didn’t care about the race or gender of their future child, rather they dreamed of adopting a newborn or a baby of 12 months domestically. Once they get matched, then the child would be the first one for the Eversons growing family.

“The path that my wife and I found ourselves on made the most sense of how we could grow our family,” Tyler said. “Adoption can be challenging, but we feel excited about it. We feel that this will be well worth it in the end.”

The reality of adoption soon hit the Eversons. They knew the process would be expensive, but they discovered that it would cost them an average of $30,000 that was contributed by legal and court fees. Although adoption was not their initial plan, they decided to put their faith into their new journey of finally being able to start their own family and find a way to be able to fund their dream. They learned a lot about the process and how to go about funding it.

“We had a lot to learn about the adoption process, and it’s easy at first to have this mentality,” Jen said. “We’re being educated on the long-term impact of adoption instead of short term.”

Funding for an adoption with high expenses seemed overwhelming at first, but there was a way that the Eversons could help offset the cost. It was through a fundraiser, but it also helps another individual in Austin.

Both Hands is a nonprofit “to serve orphans, widows and adoptive families” by helping families fundraise for their adoption. A family brings together a group of volunteers, and Both Hands coaches them to coordinate a service project fixing up a widow’s home. The family and their team then send letters to help ask for sponsors for the day of their service. No funds raised by the family and their team are deducted for any administrative costs for Both Hands.

“It was kind of emotional,” Jen said. “It felt really nice to be able to serve someone else in need who also has been through some challenges. While not necessarily that mirrored something that I have experienced, I found a kindred spirit. We’re both human and we experienced challenges. We’re just kind of helping each other out to move on with life and onto good things.”

Since 2008, Both Hands projects raised more than $11.4 million for adoptions and orphan care. Through 900 projects in 44 states, more than 1,000 widows have been served, 1,190 orphans are closer to being adopted, and more than 30,000 volunteers served their communities, according to the organization.

Having a Both Hands service project meant that the Eversons had a way to meet their goal, but also help someone else in return. After getting a recommendation from their adoption consultant about Both Hands, the couple decided to go for it. They wrote letters to friends and family for sponsorships and received donated supplies from Austin Builders Supply. Around 30 people volunteered to help the Eversons with their project. 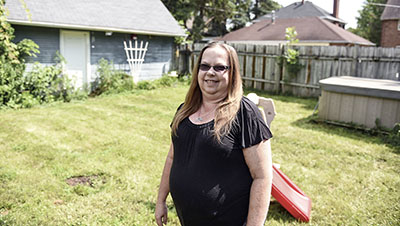 Suzie Vagt stands in the backyard of her southwest Austin home. A group of volunteers will be working to tidy up her backyard through the non-profit Both Hands.
Eric Johnson/photodesk@austindailyherald.com

The Eversons will be helping Suzie Vagt of Austin, who lost her husband Dan to cancer in 2018. Vagt’s husband loved gardening, grilling and yard work, which fit perfectly into what the Eversons planned to do for their fundraising project through Both Hands that will take place on Saturday at Vagt’s home.

“Suzie let us know Dan has always been the caretaker of the backyard,” Jen said. “He passed away and Suzie hasn’t had the time or energy to keep up with the backyard. We’re gonna do some power washing and staining her fence. We plan to help clean out her garage and weeding out the patio. Dan enjoyed grilling. We’re gonna teach her how to utilize the grill and smoker and make some raised planters for her to plant some vegetables and flower beds to enjoy them.”

After the Eversons reached out to Vagt, who Jen knew as a coworker, Vagt embraced the service project as a way to receive some help while also helping the couple with their adoption funding goals.

Her backyard was a place that constantly reminded her of Dan and his love of caring for the yard. He was an avid griller and had a green thumb when it came to growing tomatoes. Vagt said that the Eversons and volunteers plan to assist with teaching her how to use the grill and clean up Dan’s special place.

Yet, it was the ability to help both who have experienced challenges, receive blessings through caring for each other.

Photos: Walk for the Fighters

Bill and Tulip Ableson walk down the line of luminaries on Main Street during Relay for Life Friday night. Eric... read more