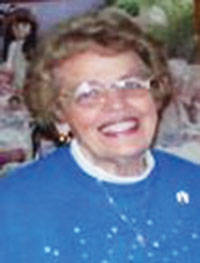 Barbara was born in in 1936 in Red Wing, Minnesota, to Verlie and Lucille Petersen. In 1952 she married Eugene (Brother) David Lewison and they resided together in Adams until he passed away in 1991. She continued to reside in their home in Adams for several years and then moved to Austin, Minnesota, twice for a short time, only to return to her roots in Adams for the majority of her retired life.

Barbie was a very gifted and creative lady and was known in Adams as one of the best cooks/bakers, cake decorators, seamstresses and knitters around. She made and sold various craft items throughout her life and decorated many novelty cakes for the locals and surrounding communities, as well as many wedding and graduation cakes. She was known around the Adams community as the scariest and most wicked witch on Halloween, greeting and frightening children that came to her door.

Barbie worked at LPC in LeRoy, Minnesota, for many years until it closed. She then was a “favorite” cook, known for her home-cooked meals, at the Adams Group Home. Upon that closing, her last job before she retired was in the laundry department at the Adams Health Care Center. After retirement, she continued to decorate cakes until her husband, who was a good helper to her in transporting her cakes, became ill in 1990.

Barbie had a full and joyous life and had a deep faith. She loved collecting angel statues and pins and had over 200 of them. Every morning she would put one of her many angel pins on her lapel to guide and protect her throughout her day. She would often talk to her angels and ask them for guidance when she would struggle with something in her daily life. Barbie stayed very active and enjoyed cooking for, and visiting with, her children and neighbors. She especially enjoyed going places and shopping with her best friend, Marlene Hillson, until her health started to decline a couple of years ago, making it difficult for her to get around easily. They continued to talk on the phone daily up until her death.

Barbie embraced death like no other; she was so prepared and smiled until the end and stayed kind to those around her. She was a true inspiration that there is a wonderful place we go and was eager to meet up with her loved ones that had already passed.

Relay for Life raises more than $24,000 for American Cancer Society

Mower County didn’t hold back in its fight against cancer. Relay for Life went off without a hitch on Friday.... read more