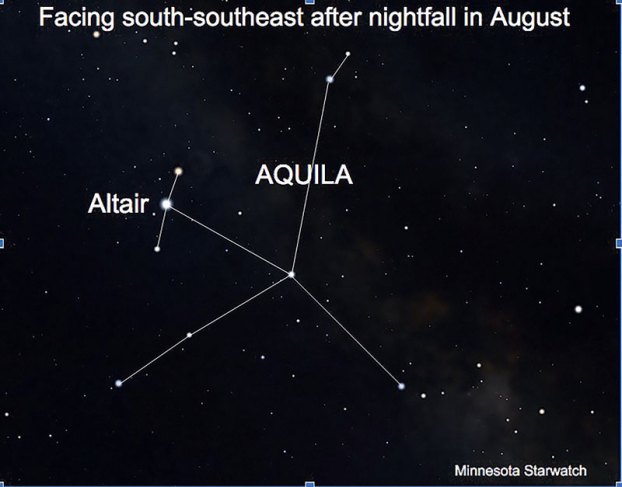 August: A great time for skywatching

August nights make for some of the best starwatching all year. At nightfall the Milky Way plunges down from the bright Summer Triangle, through stars of Sagittarius and Scorpius shining close to the southern horizon.

Brilliant Jupiter outshines its neighbor Antares, the red, glowing heart of Scorpius. Look for Antares slightly lower and west of the planet. East of Jupiter, Saturn floats between two lovely features of Sagittarius: the Teaspoon and the handle of the Teapot.

High in the east, Vega dominates the Summer Triangle from little Lyra, the lyre. Look to the left of Vega for Deneb, in Cygnus, the swan. Below these two stars, Altair, in Aquila, the eagle, completes the Triangle. Look slightly above and left of Altair to trace Sagitta, the arrow. It points east, with its feathered end right above Altair. Next, grab your binoculars and aim just above and slightly to the right of Sagitta’s feathered end to find the Coathanger of stars. A dead ringer for the real thing, it hangs almost upside down. Then, with or without binoculars, look for little Delphinus, the dolphin just east of Altair. With its spindle-shaped body pointing east and its tail hanging down, the dolphin seems to be leaping into a dark sea.

The famous Perseid meteor shower peaks the night of August 12-13, but a nearly full moon washes out much of the show. About 10 or 15 meteors per hour may sneak through the moonlight if light pollution is low. The sole moonless period that night lasts only an hour or so, ending as dawn begins to break.

That pesky moon becomes full at 7:29 a.m. on the 15th—but by then it will be long gone, since it sets close to sunrise. If you’re not a morning person, your best bet is probably to see it the night before. Moonrise on the 14th comes at sunset or a few minutes before, depending on your location.

On the morning of the 24th, early risers may catch a thick but waning moon in the east, very near Aldebaran, the eye of Taurus, the bull. Over the next several days, the thinning moon glides through the knot of bright winter constellations as it slowly tumbles into the glow of sunrise. On the 28th, get out those binoculars again and see if you can find the subdued Beehive star cluster just below a scrawny old crescent moon.

Scaling a Challenge: Austin native takes up the sport of rock climbing

Austin native Dakota Biwer isn’t fazed at the thought of dangling from a cliff with nothing more than the support... read more