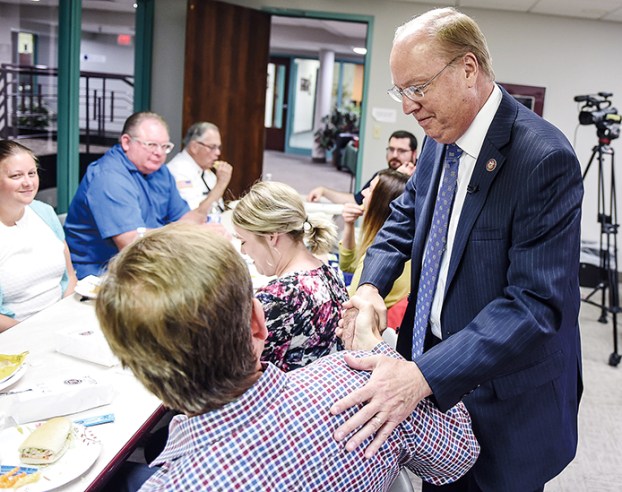 Rep. Jim Hagedorn (R-MN) visited Austin on Tuesday to discuss what’s going on in Washington, DC and to answer questions from constituents during a forum organized by the Austin Chamber of Commerce’s Government Affairs Committee.

“We’re here to learn about the community as much as possible, find out what’s going on and find out how we can be helpful,” Hagedorn said.

Hagedorn, who serves on the House Committees on Agriculture and Small Business, began the forum giving an overview of the issues addressed over the few months he has spent in Washington, DC that are of significance to Minnesota’s First Congressional District. Afterwards, he fielded questions.

“What’s going on in Washington is what you see on TV,” he said. “There is a big divide between the two major political parties. One team wants to take us a little further left than ever before. My team is trying to continue to move us in what I say is the right direction. […] In spite of that, there are several things that we can all agree on. We should say ‘let’s get these things done that we agree on and then let’s get to business on things in which we have a little more division.’”

Hagedorn said the commonalities among Minnesota’s First Congressional District were “agriculture, medical care and small businesses.” When asked, Austin Chamber of Commerce President Elaine Hansen told Hagedorn that healthcare costs and a lack of qualified workers were the two most frequent complaints among Austin businesses. 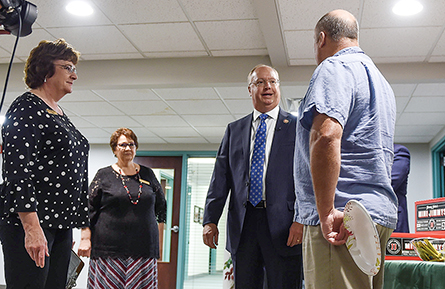 “(Vocational jobs) are lacking right now,” Hagedorn said. “There are so many companies we talk with that would be doing even more business and selling more products, except they can’t find the skilled labor.”

He noted that one of the bipartisan bills in the works, of which he is a sponsor, would allow spending programs with saving accounts for education to be used for vocational schools, not just two and four-year colleges.

Hagedorn also spoke about the new free trade agreement with Mexico and Canada, which he called “an upgrade from NAFTA” that has drawn broad support from throughout the district.

“That agreement is critically important to build momentum for the other trade deals they’re working on right now,” he said.

Hagedorn expressed concern that House Speaker Nancy Pelosi (D-CA) will not allow a vote on the measure and said that failure to pass the agreement would be “tragic.”

“If we can’t pass that in the United States, then why would any country want to do business with us and negotiate another deal?” he said. “Canada and Mexico are our best trading partners; they’re our friends. Half of agriculture in Minnesota goes to Canada and Mexico and if we can’t get that done, who believes that we’ll ever get anything done with China or anyone else?”

“We should try to knock down barriers and expand the opportunities for our farmers and agro-businesses to trade all around the world,” he added. “[…] Tariffs are a way to get the attention of these trading partners to try and reset deals. That’s what happened with Mexico and Canada and it’s going in the right direction. We want to make sure our regulations are not hurting our farmers and make sure that we sustain our farmers when times are tough and help sustain our rural communities.” 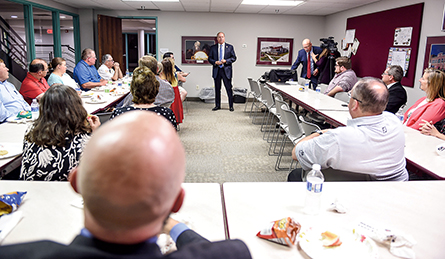 Rep. Jim Hagedorn (MN-1), speaks to those in attendance during a town hall Tuesday afternoon.

“We had three bills that came through the House Energy and Commerce Committee (that were) bipartisan; Republicans, Democrats, everybody in between supported it, to bring down the cost of generic drugs and support transparency,” he said. “They brought it to the floor with some Obamacare bailouts that Speaker Pelosi frankly knew most Republicans will never vote for so they can say ‘look at these terrible Republicans who are against driving down the cost of generic drugs.’”

He stated that House Republicans, being in the minority, vote against bills like that to give the Senate more negotiating strength.

“I don’t want to see the economy in southern Minnesota be devastated by single-payer, Medicare-for-all, and other things that are going to underfund medicine,” he said.

Hagedorn was also asked if anything was being done about hidden surprises in medical bills, such as unforeseen procedures, especially for those on limited incomes. He said a bill that he sponsored is being put together by Rep. Larry Buschon (R-IN), which follows a model used in New York that allows for arbitration on medical bills with surprise or disputed expenses.

“What happened in New York is once they realized everybody was going to get their day in court, they started disclosing (the expenses,” he said.

“It’s pretty important for transportation, safety issues and commerce,” he said. “We really have to finish it.”

He noted that an ally in the Highway 14 project is his two-time former opponent, Gov. Tim Walz.

“Even the people that ran against each other can get together and move things along,” he said.

When asked about the challenge of trying to represent the whole district, Hagedorn’s answer was clear.

“I told people what I believed in; that I was a conservative and that I was going to go out there and work with people who want to keep moving the country in the right direction.”

Photos: Welcome Back! First Day of School for Woodson and Sumner

Woodson Kindergarten Center teacher Angi Schuster, gives different greetings to each of her new students on the first day of... read more