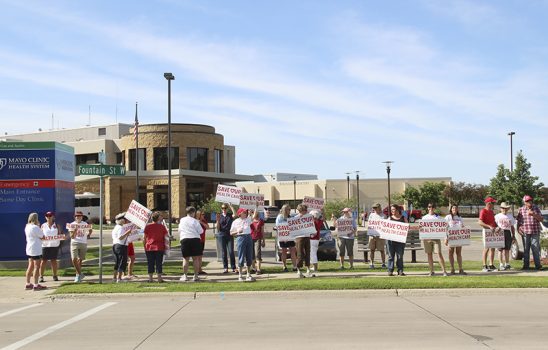 Members of the Save Our Healthcare organization stand with signs in front of Mayo Clinic Health System in Albert Lea Wednesday afternoon to mark the transition of Albert Lea's medical and surgical care unit to Austin. - Sarah Stultz/Albert Lea Tribune

Residents gather to mark consolidation of services in Albert Lea

The services are consolidating this week to the health system’s Austin campus as part of a consolidation of services that began in 2017 between the two campuses.

“It’s a sad day for Albert Lea,” said Albert Lean Dave Karge, a member of the Save Our Healthcare grassroots organization that gathered Wednesday at New Denmark Park. About 40 people met at the park, and several members of the group walked up to the hospital carrying signs to mark the loss of the service in Albert Lea before returning to the park. 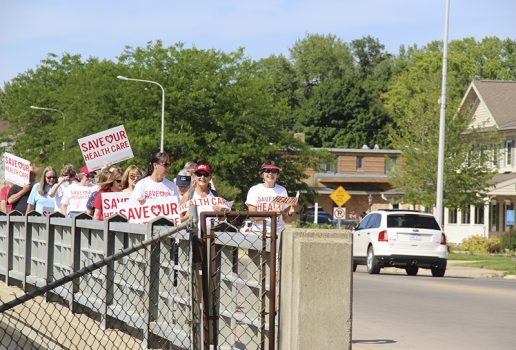 Members of the Save Our Healthcare organization cross the bridge over the Fountain lake dam Wednesday afternoon on their walk from New Denmark Park to Mayo Clinic Health System in Albert Lea in recognition of the last day of the medical and surgical care unit in Albert Lea. – Sarah Stultz/Albert Lea

LouAnn Stoen of Albert Lea said she worked full-time in the medical and surgical care unit for about 35 years until 2014.

“My heart has been so heavy,” Stoen said.

She said she has been going through a grieving process of sorts since finding out the services would be transitioning. Her focus recently has been trying to support her friends who still worked there.

Ciota said all the staff who worked in the unit in Albert Lea have a job moving forward — some went outside of Mayo and many stayed inside of the Mayo organization and took different positions. He noted eight nurses from Albert Lea will continue in the same capacity in Austin.

The press release stated the medical and surgical care unit in Austin will have three providers at all times versus one previously in Albert Lea and two in Austin.

Ciota said it should be determined in the next month when labor and delivery services will move from Albert Lea to Austin, though it is likely to take place this year because of physician and nursing staffing shortages.

Ciota, who also works as an orthopedic doctor, said it has been a challenging week for employees and the community. 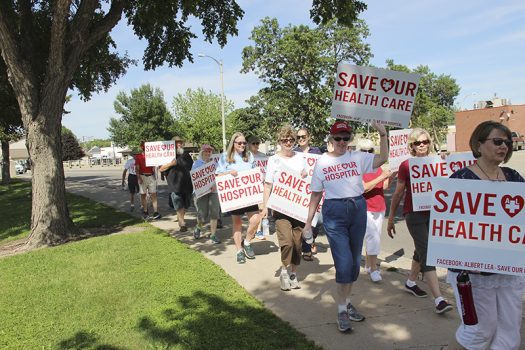 Residents with the Save Our Healthcare group walk down Bridge Avenue before turning onto Fountain Street and ending in front of Mayo Clinic Health System in Albert Lea. – Sarah Stultz/Albert Lea Tribune

“Yesterday I was up on the second floor,” Ciota said. “It was a very emotional, a very sad time for those of us that live in Albert Lea and spent our careers there.”

He said though he and the other staff have been asked to provide the best experience possible for Albert Lea patients who need hospitalization at the Austin campus, it doesn’t diminish the emotions felt this week.

The Albert Lea campus continues to provide emergency services, outpatient surgeries, clinic visits, care during pregnancy and after delivery and pharmacy and lab services, among others.

Ciota said if people need emergency care, they should continue to go to the emergency room in Albert Lea as they have done in the past. If they need to be hospitalized and require an ambulance, they will be transferred to the Austin campus at no cost to the patient.

Spoors sentenced to over 10 years in prison for murder; Stabbed his mother Susan Spoors in 2018