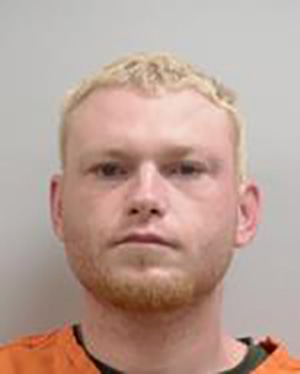 According to Austin Police Chief David McKichan, officers were informed on Thursday that Trouper Montgomery Paulk Gilbertson, 29, a probationer from Albert Lea, had a parole hold warrant issued from a prior first-degree burglary conviction. They were told Gilbertson was in downtown Austin near the Department of Corrections offices and were given a vehicle description. An officer spotted a vehicle that matched the description at 8:44 a.m. and got behind it as it turned onto Oakland Avenue and headed toward Main Street. The vehicle contained a male driver and a female passenger.

Police later received word that Gilbertson had returned to the downtown area. The officer that originally pursued Gilbertson spotted him near the Twin Towers and apprehended him on foot. Gilbertson was caught and taken into custody at 10:03 a.m.

Gilbertson is in the Mower County Jail awaiting possible charges of vehicle theft, fleeing a peace officer and reckless driving. A review of his criminal record shows prior convictions for theft and burglary.

What the logo means • The Austin A in the center symbolizes Austin Public Schools. The A was included as... read more