The third season of Cedar Summerstock productions will open Thursday, June 20, with the rousing production of “Oklahoma!” the Rodgers and Hammerstein treasure that is among the most beloved of American musicals.

Armed with talents in singing, dancing and acting, the troupe of college theater students or recent graduates are ready to show why Mitchell County is quickly becoming a summer theater destination. Productions are held at the Krapek Family Fine Arts Center at the Cedar River Complex in Osage. Thursday’s show begins a two-week run that ends June 30. 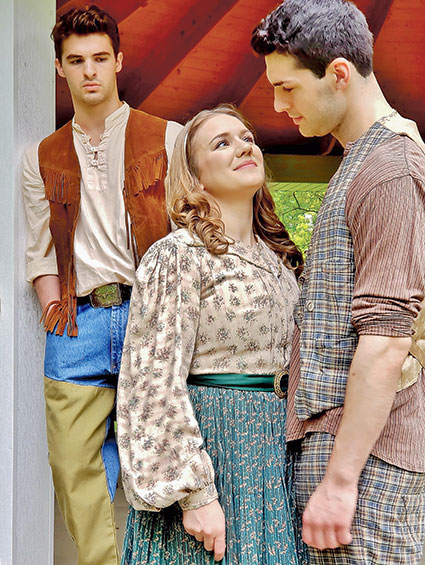 Anna Peterson (Laurey) and Sage Spiker (Curly) in a scene from “Oklahoma!” which opens Thursday at the Krapek Fine Arts Center at the Cedar River Complex in Osage. At back left is Brendan O’Leary (Jud Fry). The show is the first to kick off the four-show Cedar Summerstock season.
Deb Nicklay/newsroom@austindailyherald.com

“Oklahoma!” is set on a farm in Oklahoma Territory, just after the turn of the 20th century. It centers on farm girl Laurey and two men who both want her hand: cowboy Curly, her real love, and Jud, a troubled farmhand whose dark presence scares but also fascinates Laurey. Another cowboy, Will Parker, has his eye on the irrepressible Ado Annie, who can’t make up her mind about a suitor, with comic results. 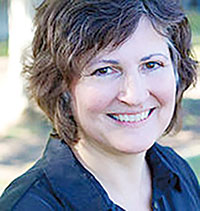 Returning this season is veteran director Craig Johnson of Minneapolis, whose past Cedar Summerstock productions have included “James and the Giant Peach,” “Main Travelled Roads,” and “Pirates of Penzance.”

Johnson said he appreciates the enduring questions “Oklahoma!” poses – questions just as pertinent in 2019, over 75 years after the musical premiered.

“As in who are we as Americans? What do we value and what do we believe?” he said. “As it says in the show, ‘we know we belong to the land and the land we belong to is grand,’” adding that it also makes us think about what makes up a community, “and how we get along.”

Lee agreed, adding the lens through which this generation sees the show may be different than in earlier years.

“In the past, Curly was the ‘savior’ – he saves Laurey from the creepy guy; when we look at it today, Jud is more portrayed as misunderstood and bullied. It puts a new twist on it.  It’s a really rich show; it can be reimagined decade after decade. And, of course, we have that wonderful music – it’s Rodgers and Hammerstein.”

Brendan O’ Leary, 21, a University of Minnesota theater major from Detroit, Michigan, plays Jud. Exploring characters while keeping up a summer stock schedule is exciting to him.

“I enjoy how we dive headfirst” into shows and the energy that results.

Jud’s nemesis, Curly, is played by Sage Spiker, 22, of Oxford, Iowa, who recently earned his degree from the University of Iowa. He found the summer program attractive for the opportunities it offered. The program has made him feel “more connected to the cast than I have in previous things. And it’s a chance to play really wonderful roles,” he said.

Anna Peterson, as Laurey, returns for her third season. The Alexandria, Minnesota, native and recent Boston Conservatory graduate said the program’s quality brought her back. Audiences will remember her as Marian in “The Music Man,” Lily St. Regis in “Annie,” and Ruth in “Pirates of Penzance.”

“This year, I saw the shows they were doing, and oh my gosh, these are such great shows … and I love ‘Oklahoma!’ And I love these people; they’re like a second family.”

For the first time, two local college theater majors are part of the troupe: Maggi Steele, 18, who attends the Institute of Arts Barcelona, in Spain, and Sterling Isler, 21, who attends the University of Iowa. Both are from St. Ansgar and said they are both headed to performance careers.

While Steele said performing summer stock in front of hometown neighbors and friends was “cool,” it was also a bit intimidating. 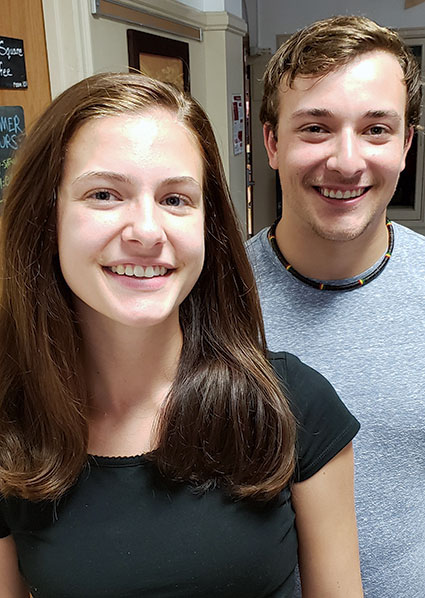 Maggi Steele and Sterling Isler, both of St. Ansgar, are members of the Cedar Summerstock theater troupe this summer. Steele is a musical theater major at the Institute of Arts Barcelona, while Isler is a theater major at the University of Iowa. Deb Nicklay/newsroom@austindailyherald.com

“You really want to do well, do your best,” she said. Steele will fill a crucial role in the famous ballet that is part of a dream sequence. The ballet is not always performed since many troupes do not have trained dancers who are able to perform it.

She has been active in shows for several years despite her young age, including those at St. Ansgar schools and Riverland Community College in Austin.

Isler is also a veteran of St. Ansgar school productions. He is studying for a double major in enterprise leadership, a business degree, in addition to theater.

“But right now, I am really focusing in on performing,” he said.

Becoming a part of Cedar Summerstock was not a hard choice, he said.

“I’d seen a few (Cedar Summerstock) shows from previous years and I just thought it was incredible; when I was young and growing up here, we didn’t have anything like this – anywhere around here.

The troupe will be joined by local actors and singers in all the shows, Lee said. Many will makes up a large children’s choir from all three county schools that will be part of “Joseph and the Amazing Technicolor Dreamcoat.” Other shows are “9 to 5,” and “You’re a Good Man, Charlie Brown.”

“Oklahoma!” runs through June 30. For times, dates, upcoming productions and tickets, go to: https://cedarsummerstock.tix.com/ Tickets are also available at the door.

Comicker Press is back with “Shots Fired,” a revamped version of the comics anthology formerly known as “Every Day.” As with... read more